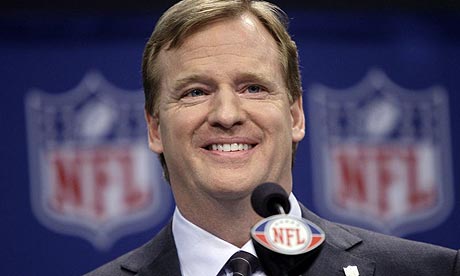 “Due to the large number of player injuries, mostly to our star athletes, we met with team owners last week and came up with five solid changes that will keep our guys safe and the league thriving,” stated Goodell, while tapping his finger tips together and laughing like a creep. “Plus, it’s been like 6 days since we’ve added a rule that everyone will hate me for. That’s way too long.”

The rule changes are:

1) Every quarter will now have a 2-minute warning in which players will join midfield for a brief snack of milk and cookies. This will not only fight off osteoporosis while strengthening bones with calcium, but it will also strengthen fellowship amongst players so they don’t fight as much. This rule will be strictly enforced in Miami.

2) Nerf will take over jersey production from Nike. Nerf will manufacture a new phase of performance foam jerseys that will provide protection for the players during hits and falls to the ground. Plus, Nerf promised to put their logos facing the right way on both sleeves.

3) Quarterbacks will now have a 10-yard halo around them at all times. This rule prevents all “roughing the passer” penalties and also protects franchise players from being needlessly hurt. The NFL is confident explaining this rule as a “restraining order of 10 feet to the quarterback” will help players to not only understand the rule better, but to abide by it as well.

4) Touchdowns can be taken away for taunting and/or DUI’s. Two of the biggest issues the NFL faces (outside of murder, illegal drug use, excessive alcohol use, concussions, long-term injuries, bullying, domestic violence, gambling, bounties on players, derogative social media posts) are taunting on the field and driving under the influence. However, the league plans to prevent low-scoring games by implementing rule #5.

5) End zones will expand by 10 feet on the sidelines and the back lines. This will allow more room for players to move freely without the threat of getting tangled up with one another. It will also increase scoring chances for NFL teams.*

While fallout from the new rules is expected, Commissioner Goodell went on to add that he is prepared to defend the changes. “The biggest worry from owners was the sweat retention in the Nerf jerseys, which is valid because if anyone has tried to throw a wet Nerf football they know. My only response to that is, it will slow the game a bit, but maybe that’s for the best. This should help raise the number of white guys in our league.”

When asked about the quarterback halo rule, Goodell said that it’s just as simple as asking the quarterback to stop. “Of course we can’t have a guy ride roughshod over the field, that’s unfair, so we amended that rule with the “15 yard non-stop” penalty which basically says that if the quarterback keeps running after an opposing player yells stop, the offense will be penalized 15 yards.”

Goodell admitted that the rash of new rules won’t keep players from getting hurt, but it’s a step in his ultimate goal. “I hate physical contact of any kind, so hopefully these new rules will lead to the NFL being strictly a “no touch” league, or as most people call it, basketball. I love basketball. Plus, the amount of money we would save on insurance, equipment, and settlements alone would be worth it.”

Early reactions from fans have not been positive. Kenny Franklin, a Bengals fan from Akron, OH, says, “More rule changes? This is bull! I’m boycotting the NFL and never watching another game again. Until the Bengals or one of the guys on my fantasy team plays.”