Skip to content
NFL
April 6, 2009 Guest
Let’s take a quick break from all this baseball talk and head 88 mph with 1.21 gigawatts to Week 15 of the NFL season.

The tide changes though.

The Chiefs get stuffed on 3rd and short with 5:14 left and are forced to punt from their own 36. Rivers leads the Chargers down the field and scores with 1:12 left to play. It will take a miracle to win now.

The hands team is in. The onside kick hits a leaping Dwayne Bowe in the hands… and in true D. Bowe fashion comes bobbling out. The ball hits the turf. San Diego pounces on it. 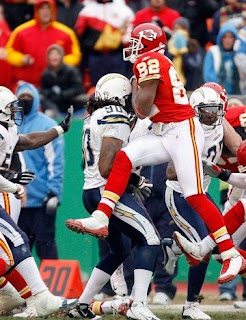 River’s rolls on another drive and San Diego has the game winning TD with 30 seconds still on the clock. The Chiefs shank a 50 yarder and the stars start to align.
San Diego proceeds to win out and make the playoffs as Denver falls apart (much like the way the Arizona Cardinals played down the stretch). This is where the story gets good though.
San Diego goes from being the disappointment of the year to the team that knocked off the MVP in one of the best games of the payoffs. Darren Sproles becomes a house hold name and receives a nice raise in the off season.
Denver is pissed. Mike Shanahan gets fired for missing the playoffs. Jay Cutler was in love with ole Shanny. He’s pissed now.
Josh McDaniels is hired as the new coach. Denver seems happy with the hire.
The Chiefs then trade for Matt Cassell and Mike Vrabel for 50 cents and a Mike MacFarlane rookie card, and the story leaks that Denver was very close to making the deal but got snubbed at the last minute. Not only that, but supposedly their offer yielded a much nicer return to the Pats.
Cutler was already pissed about Shanahan being fired, and when he finds this out, he is double pissed.
Cutler gets mad. Him and McDaniels meet. He is even more pissed and demands to be traded.
Denver proceeds to trade Cutler for the Bears future and Kyle Orton.
Whew… let me catch my breath.
Dwayne Bowe’s drop literally caused all of this. Had he caught the onside kick it probably goes the other way. The Chargers are in hot water and all is fine in Denver after another AFC West title.
From where I am sitting though, I can’t imagine a more hilarious situation for my Chiefs. The Broncos just traded the best quarterback in the division away. The organization is a mess right now. The Chiefs rebuilding year all the sudden feels like a year where we could contend. Too funny.
If I could go back… I wouldn’t change a thing.