Skip to content
All Sports
October 21, 2009 Austin
Today is my birthday.
You’re reading this while thinking to yourself, “Whoop-dee-doo!”

Twenty three years ago today, I came out of my mother.

Well, not really hard to… Just something I don’t really want to.

Anyway… Today is my birthday. 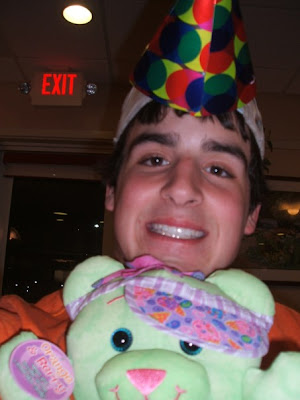 Most people get really excited on their birthdays. They think back on their lives to dwell on all of the things they have accomplished and how they have lived to see another year.

Well, not this guy. Nope.

In fact, I am depressed.

I’d like to think I have accomplished a lot by the age of twenty three, but the truth is, I haven’t.

I could keep going.
But I’m not going to for the sake of this post.

Because the point of this post is to point out how much I HAVEN’T accomplished in my twenty three years on this planet. Granted, I know I shouldn’t compare myself to others because everyone is different, but these guys just have done so much more than me by their 23rd birthdays.

Ben Roethlisberger
Big Ben went 14-1 his rookie season (including playoffs). He brought the Pittsburgh Steelers to the AFC Championship and won Offensive Rookie of the Year. What did he do for an encore? Only brought the Steelers to Super Bowl XL and won. Oh, no big deal. He only won a Super Bowl before the age of 23.

Michael Phelps
Luckily for me, he was already 23 when he won 8 gold medals in 8 tries last summer at the 2008 Summer Olympic Games. However, in 2004 at the ripe age of 19 the kid won 6 gold medals and 2 bronze medals. Seriously, Mike?
2 bronze?
What a let down.

Usain Bolt
The man won 3 Olympic gold medals for track in Beijing last summer. He has set and broken his own records to be named “The Fastest Man On The Planet”. And he just turned 23 in August. I have the nickname, “The Fastest Typer On This Blog”

Tiger Woods
Tiger signed a $40 million deal with NIKE, a $20 million deal with Titleist. I signed a receipt at Chipotle the other day for $6.80. Only I was paying the $6.80, not recieving it. Woods was also named the 1996 Sports Illustrated Sportsman of the Year (Who has ever heard of Sports Illustrated anyway?) and he was named the PGA Tour Rookie of the Year. Oh, and one more thing. The 21 year old Tiger Woods won the Masters by 12 strokes with a score of 18 under par.

Tim Tebow
He is currently still 22. So everything he has done and IS DOING now constitutes for things he has accomplished before 23. Screw you, Tebow.

Michael Jordan
The greatest basketball player of all time accomplished a lot by 23 (The number in which he made famous). In 1982, at the age of 19, he won ACC Freshman of the Year and hit the game winning shot in the 1982 National Championship game against Georgetown. I did that once too… (on NCAA March Madness 2005) He went on to win the Naismith and Wooden Player of the Year Awards in 1984, the same here he entered the NBA Draft. He was voted as an All-Star and won Rookie of the Year. His next season was cut short due to an injury. Well, suck it Jordan, I broke my nose!
Too bad Jordan never amounted to anything after that.

Alright, well you guys get the point. I can’t continue to depress myself with how little I have accomplished in 23 years. I hope you guys have a Happy My Birthday! I am going to leave you with this video of fellow Korked Bat author, Frank, bursting my balloons (literally) on my birthday in 2004, our senior years in high school. Notice how Frank just totally interrupts me while I am flirting with my soon to be girlfriend at the time. Needless to say, Frank has a knack for interrupting me when I am, for lack of a better term, spitting game. Oh, and on top of all that, Frank popped my birthday balloons. Thanks Frank?