I usually don’t like to judge NBA players for the stupid things that they do. I understand the backgrounds that many of them come from and, honestly, their arrogance and stupidity aren’t always their fault. Think about it this way… due to their physical abilities, most of these players have been worshiped since they were teenagers, which probably explains their arrogance, and a lot of players in the NBA have spent less than a year in college, or had to cheat on their SATs just to get in, which probably explains their lack of education.  However, while watching SportsNation this past week, I learned a little bit about Boston Celtics guard, Marquis Daniels, and I have come to the conclusion that he might just be the dumbest and most conceited player in the NBA right now.

While reading this, you are probably starting to think of all the stupid things that other NBA players have done.  There was the Malice in the Palace, Iverson talking about “practice”, and just about everything that Shaq has ever said.  But those guys at least have an argument against their dumb moves. Allow me to explain. 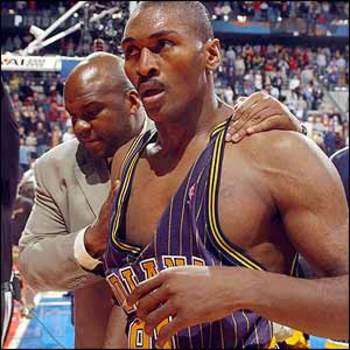 The Malice at the Palace

With only 46 seconds left in the game and the Pacers winning 97-82, Ben Wallace got fouled hard by Ron Artest, starting an altercation between the two.  After being broken up by their teammates, someone threw a drink at Artest, causing him to Hulk out and go on a rampage with a few other Pacers.  Although this was a total thug move, and ruined Ron’s career for nearly 5 years, the guy that threw the drink at him had it coming.  The spectator threw a Diet Coke at him!  The spectator is the stupid one, in my opinion. Mainly because of the fact that Artest is much bigger than him and everyone know he prefers his Hennessy with regular Coke.  Ron Artest, you are Forgiven.

Although Iverson often praised Larry Brown, the two often butted heads over AI’s ball hogging and his overall mentality.  When the 76ers lost in the first round of the 2002 NBA Playoffs, Brown spoke out against Iverson, saying that he had skipped multiple practices and that the team needed his leadership.  Instead of apologizing or talking about the future, the franchise player goes on one of the stupidest rants of all time.  Apparently, (and don’t take my word for this) the point he was trying to make was that Larry Brown was talking about practice and not a game (he should have just said it, instead of beating around the bush). After his rant, Iverson continued his career missing his first game for the Memphis Grizzlies (a game, not practice).  Since his rant is still the funniest quote in sports history, Forgiven.  (However, missing a game after this rant is very funny, but not forgiven.) “I am the number one Ninja and I have killed all the Shoguns in front of me.”

“Our offense is like the Pythagorean theorem: There is no answer!”   (

“I’ve succeeded at every level, except high school and college.”

“Yeah, have fun over there.  And if you see any of my Irish cousins, tell ‘em I said, ‘Shiver me timbers,’ or something like that.”

I am not sure if he is trying to be funny or if he is really that stupid… either way, Shaq is the funniest guy in the NBA.  Forgiven.

This past week, Marquis Daniels celebrated his 29h birthday by  having a 3-D diamond head made in his own likeness.  This piece weighs more than three pounds and is made up of more than 1300 grams of 14k gold and diamonds.  I am not a connoisseur of diamond pendants, but this guy makes around 2 million a year. I feel that this might be a little out of budget for a 3rd-string guard.  And after looking up Daniels player bio, I learned that he has a tattoo on his left arm that is intended to represent his initials in Chinese.  However, they actually translate to “Healthy, Woman, Roof.”

Daniels supposedly graduated from Auburn and then went undrafted.  I’m sorry Marquis, but your stupidity and your arrogance are Not Forgiven, you healthy woman roof!

* – The quotes from Shaquille O’Neal were taken from the site www.shaqquotes.com