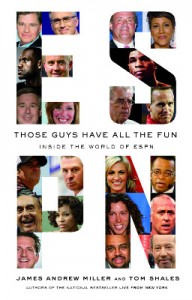 James Miller and Tom Shales recently authored a book that’s been all over the news and blogosphere.  Those Guys Have All the Fun is perhaps the first exposé on ESPN as a company and what moves they had to make to become “The Worldwide Leader In Sports.”

Here’s what Stephen Douglas of Big Lead Sports had to say about his anticipations with the book:

“So will this book blow the dome off the ESPN campus? Will all the disgruntled former employees tell stories about late night cocaine use that helped to fuel SportsCenter’s golden era? Was Craig Kilborn the Chevy Chase of SportsCenter? What does The Decision have to do with Sarah Palin? Am I seeing too many SNL connections?”

Here at Korked Bats, we feel slightly irked that we weren’t mentioned as heavy competition for ESPN. Or that we even got a book. Or at very least, a pamphlet. Our readers want to know the nitty-gritty details about how we’ve become the internet’s go-to source for sarcastic commentary on today’s sports topics.*  (* – denotes what we think) Well don’t you worry, because we’re happy to present: 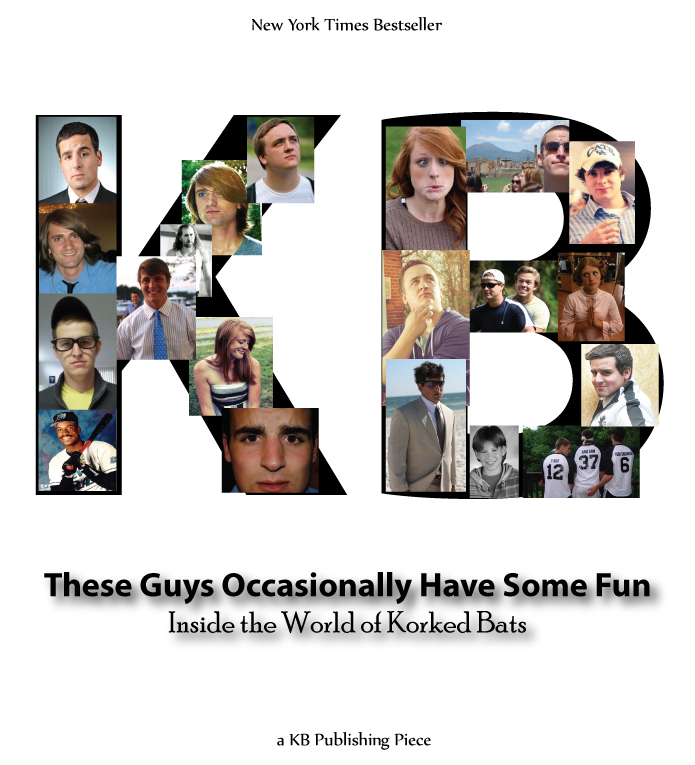 Excerpts Pulled From The Book:

Korked Bats is truly a unique contribution to the internet. Their delivery and approach to the sports world is unlike any other. People have been quoted saying, “You mean like corked bats as in illegal corked bats?” One avid fan said, “Like the thing Sammy Sosa got caught with?” The KB team was pleased to hear these quotes from our interviews from fans. Frank said, “You guys, they think we’re as good as Sammy Sosa!” They had trouble understanding that no one had actually heard of KorkedBats.com.

Keith, Korked Bats’ web designer, and Austin, Korked Bats’ head writer, were house-mates in a house that neighbors referred to as “Casa de Amigos,” which Keith said roughly translates to The Cotton House. He said about his relationship to Austin, “I always thought there was something… different… about Austin. It may have been the way he could sleep with his eyes open staring at the ESPN website, ESPN on TV and a mobile broadcast of ESPN on his iPhone simultaneously… maybe it was his obsession with doing the perfect Justin Beiber impression. I dont know, I could never put my finger on it. However, I’ll always remember the day he came up to me and whispered in my ear, ‘Do you know how to install WordPress on a server?’ I was alarmed because I was sleeping, but in a stupor I responded eloquently, ‘Yes. I think so.’ And that’s where it all started.”

On fame, Keith said, “That was sort of the day my life changed. After we had the site up and running success took me into the celebrity world of WordPress installation and random technical tasks. Sometimes it’s hard to walk in front of movie celebrities or presidents of the united states and not get my picture taken by the paparazzi. I guess that’s just the life.”

“We weren’t prepared for all the scrutiny we’d receive from the media, fans, and groups and organizations that were effected by our slip up.” Austin said. On May 3rd, 2009, Frank wrote a post about seeing former Florida Gators quarterback Chris Leak at a restaurant. In the post, he included repeated racial slurs that had the KB readers (both of them) taken aback.

“Had I known, I never would have written the post,” Frank said. “I never realized so many people would be offended by the Cracker Barrel.”

Direct Quotes Pulled From The Book

“I still haven’t gotten over not being invited to do the podcast… It’s probably because Austin’s afraid of sounding stupid next to a guy with pipes like that Cleveland homeless guy.” – Bryce

“I hate working here. I’m going to see if I can get my job back at Old Navy.” – Erin

“One would think that since most of the writers on this site haven’t even met one another, the affairs, conspiracies, felonies, murders, child abductions, and other controversial activities would be minimal at best. Not so fast my friend. Ever since Austin “accidentally” tweeted NSFW pictures of himself to our hundreds of Twitter followers, it seems that everyone thinks that it’s their turn to get their name in the tabloids.” – Frank

“Now that I think about it, I probably shouldn’t have tweeted those pictures.” – Austin

“There was a lot of tension in the air when Erin joined the staff.  I mean, a female writer on a sports blog?  And she doesn’t laugh at fart jokes?  The jury’s still out as to whether we’ll keep her around.” – Bryce

“The number of visitors to our site went up dramatically when Chris Nester joined the team.  Any time you have a writer that looks like Legolas from Lord of the Rings, you’re going to get some serious traffic.” – Bryce

“What the [expletive] is a Legolas?” -Chris

“We really saw an increase in traffic when Chris joined the team. Not because he’s an aspiring comedian living in New York City, but because he looks like Scott Stapp.” – Austin

“Before I joined the Korked Bats staff, I was alarmed at the public bashing of Quidditch.  I wasn’t sure I could work in an environment that didn’t believe riding on broomsticks in capes is cool.” – Bryce

“I wrote really good code for the website. Does that count?” – Keith

“I once kinda interviewed Michelle Beadle. That was cool. Until she realized I was outside her window.” – Austin

“Sure, I knew that once I started writing for the site we would get more female readers, but that was a price I was willing to pay. It’s 2011, and women know how to use computers now. That’s just a fact I had to learn to accept.” – Chris

“Rome wasn’t built in 40 years. And neither will Korked Bats. It takes time.” – Austin to the Korked Bats Team

“Austin usually botches up great quotes when trying to inspire us in meetings.” – Bryce

The book was originally scheduled to have 1200 pages in it. However, after all the edits and deletion of irrelevant information, the book was brought down to 39 pages (including an index, a table of contents, and a seemingly unnecessary “Notes” section).