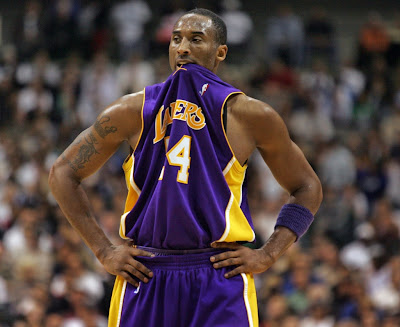 Kobe’s enigmatic personality leaves everyone wanting to know exactly what goes on behind that stare… What’s that? Not everyone? Well me at least.
I remember reading the comments by Phil Jackson crawling across the ESPN Bottom Line, and rejecting them Dikembe Mutombo style (complete with the finger wag).

There was no way that the guy frozen in time hyperslamming on Michael Olowakandi in the poster on my bedroom door was “uncoachable.”

I remember reading in disbelief passages from Jackson’s book

That was a fair assessment for a 14-year old.
Hey Reali, score a few points for 14-year old me!
(From within) “Thanks!!”
But ignorance is bliss.

• • •
When I got the the end of the Wikipedia page, I was sick to my stomach. I’d read more details than I’d ever needed about the case. Things I didn’t know. Things I wouldn’t have understood when I was younger anyway.
But the facts weren’t that “out there” when it was all happening. A lot of the details about the case were – as you could probably imagine in a sexual assault case – too mature for a station owned by Disney.
So I wasn’t the only one that didn’t catch all the details. Honestly, how many people would you imagine went that extra mile to find out everything? I’m sure there were some, but I wager that most sports fans that lacked a vested interest in the matter went out of their way to get the entire scoop.
I was about to get it.
You’ve surely been to Wikipedia before. At the end of each post (the legit ones at least), there are citations. It was like reading Mein Kamph – I couldn’t stop reading more, as much as it distressed me.
I stumbled across what set this entire post into motion.
Do you ever have a question, get on the internet to answer it, and then just find 20 more questions in the process of trying to answer the first one?
Cue me in this situation.
I stumbled across the questioning of Bryant by the Eagle, Colorado police investigator hired to look into the sexual assault charges by a young lady against him.
Gather yourself here. I’m talking about an interview of Bryant – at most – twelve hours removed from the encounter he had with the girl.
(Here’s some quick exposition for anyone that is lost right now: Bryant was getting knee surgery in Colorado and staying at a resort by himself in Eagle. He was married. He began flirting and eventually took a 19-year old hotel worker up to his bedroom and had sex with her. The two parties vary on exactly what transpired, but the next morning the girl went to the police department and claimed she had been raped. That gets us to where we are now.)
I don’t know that I’ve ever read anything more surreal in my life.
As I dazed through the testimony, the walls came bursting down. Everything came into focus- not necessarily in the way you’d like.
In that testimony, Kobe rendered himself a disgusting human being. Not a rapist, but a demeaning, filthy being. Again, I’m not kidding when I say don’t read anything about the inner parts of the case unless you have a high level of tolerance for incredibly adult conversations. Seriously.
He drops f-bombs like a drunk, affronted Real World cast member. He talks very explicitly about his sexual encounters and preferences. He offers to pay off whoever he needed to to make sure the story didn’t go public. He talked openly about having another mistress that he often had sex with – despite having a wife and 6-month old at home. He talks about masturbation.
This is all stuff that came out in the first questioning of him. I couldn’t allow myself to read court documents or anything else. I was too shocked by the first thing I read.
Changing gears, you need to remember that this was before Wikipedia. You could argue that this was before people knew how to use the internet to get any answer about anything ever. The average person knew little about the entrails of the case. We knew the basics.
But, do you know who did read everything though – largely because they had no choice?
Can I get someone to buzz in and say “Who are America’s media personnel?”
• • •
If you want to know where the media’s divine hatred for Bryant comes from, look no further than the case they had no choice but to cover.
They had to read every disgusting detail of the entire case, to learn first hand exactly the type of person that Kobe Bean Bryant was. They probably didn’t publish most of it – what publication would include details of the involved themes?
But what they learned couldn’t be unlearned.
There’s a whole litany of occurrences and details that send hatewaves of Kobe Bryant from the world of press to the world of readers. (See the 05-06 and 06-07 MVP voting. I’ll never let it go.)
They’ve created a trickle-down effect that any Republican would marvel over.
To the uninformed public, Kobe Bryant is just a egotistical ball hog that rips his teammates for not giving him the ball on every possession. We’re made to think that because there’s a bias against his character, against what’s at his very core. What we hear about his Bad Teammate Syndrome is really just a translation of a deeper emotion- disgust.
Because they’ve all been forced to see it.
So let’s go back to our pressing issues.
We all know what the b-variable is now. Not only did that entire case change what the world thought about Kobe Bryant, it changed what Kobe Bryant thought about himself. When his teammates didn’t come immediately to his aid, he reacted the way you’d expect a person with an ego the size of Barry Bond’s dome to react when feeling self-conscious: he became defensive. You can’t blame his teammates for not going straight to him. Details were scattered. But you couldn’t rationalize that to him.
He felt abandoned.
He reacted the only way his personality would yield. He threw his teammates under the bus. He told the media that he should’ve done what Shaq does and pay off women that he had sex with. He accused Karl Malone of hitting on his wife.

He made it a hell of a lot easier to turn the world against him.

He let his game suffer. He stunted its growth. He made being the next Jordan obsolete.
He was no longer the best player in the game. (at the time, at least)
He was wholly wrecked.
• • •
So what was the final toll from this entire – for lack of a better term – ordeal?
In short, it was ubiquitous.
If you look at our a+b=c equation, imagine that c=109,284,750,385, a=3, and b (the sexual assault case, in case you missed it)=109,284,750,382.
In retrospect, it’s easy to tell that Kobe’s changing attitude in 2002-03 season (variable a) was just natural progression. Eventually he had to take on his own team, and that was the beginning stages.
The sexual assault case did the most damage (understatement alert!!!). Forget that Kobe was acquitted because a series of de-legitimizing testimonies and statements culminated with the girl refusing to testify – thus throwing the case out.
The damage was done. Things couldn’t be unlearned. Kobe couldn’t forget what he had done to himself. He emerged a shielded, defensive quagmire. He stopped developing as a player. His relationships with his teammates were destroyed because he was looking for a vice, looking for someone else to blame for something else.
The media hated Kobe for what he made them see. Forget his basketball persona. They’d been forced to watch a core of divisive actions and character-destroying statements. They were there for it. The fact that he didn’t like passing the basketball just gave them a medium for their new-found disgust.
They haven’t reneged since.
I hear what you’re saying. “But Jared, Kobe won the MVP in 2008.”
Yes he did. But they had no choice. Eventually some humanity in the form of karma and basketball integrity forced him to win one. That’ll be all for him. Mark my words.
The NBA and MVP voters alike have said “Here Kobe. Here’s your MVP. Now get out of LeBron and Dwayne’s way.”

You could argue that things have improved. The case seems to have dissipated some. But the foundation remains. It always will. Ask Ray Lewis.
Sure the dropped endorsements have come back. Sure he’s “a better teammate.”
But the world will forever view Kobe as an enigma. As a poor man’s Michael Jordan that looks “coached” (copy-write Bill Simmons) in interviews. He’ll forever be viewed a selfish talent that tried to throw his teammates under the bus. As a guy always fighting to be the best, but never viewed as it.
I don’t think he’d have it any other way.

2 thoughts on “The Kobe Enigma”