Here are some of the highlights from the really interesting and at some points flirty, but always professional interview I had the honor of conducting with the former basketball star, Shaquille O’Neal:

I imagine he made this face.

Shaq: Who else would know about Phil Jackson’s deal with the devil and Kobe’s fear of spiders?

Erin: You actually have a point Mr. O’Neal.  Is it okay if I call you Shaq?

Shaq: I would prefer Mr. O’Neal from you, since we just met and you just accused me of maybe being Rick Fox.

It’s important to note that Mr. O’Neal could have fallen asleep during this part of the interview.  I heard heavy breathing on the other side of the phone. This could have been him going up stairs or moving a refrigerator, but I lost him for the length of one solid REM cycle.

(Erin continued) …I was never really good at a few things in basketball, like making baskets from behind the free throw line and from those really hard corner places that are so hard to gauge how far away the basket really is.  But you always stood for the underdog.  The slightly overweight.  The prematurely tall.  The bad at field goals. You inspired me and many others to continue to try out for my school’s basketball team year after year after year, in the hopes that one day I would play for the LSU Tigers in Hot As Death Valley Canyon whatever the crazy “Death” name place it is. You also inspired me to buy the Icy Hot Patch.

Shaq: I’m sorry, what did you just say?

Erin: Oh, was it the reference to your 1996 cult classic KAZAAM that got your attention, Mr. O’Neal?

Shaq: I thought we were going to talk about my basketball career?

Erin: Tell the audience how much you did or did not like to hide in a boom box waiting for someone to let you out?  This says here on IMDB.com that you had to wait for THOUSANDS of years.  I know that this is a gross overestimation, but when you went into the boom box was your outfit just for comfort or was that what people were wearing back then? I know that when I am going on a road trip or something like a long airplane ride, I wear clothes that are comfortable and easy to move around in, but I’m not sure if you were thinking comfort or trendiness when you were getting ready to go into that lamp, or in your genie case, a boom box.  If we could show the picture please: 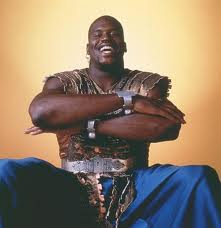 Shaq: This was a chance for me to show my creative side and make something that my kids could really enjoy…

Erin: But did you feel like you didn’t get the full genie gig because you didn’t get to come out of the traditional lamp?  Have you ever thought that you might have been freed from that lamp hundreds of years before, had people known to be looking in a boom box? After Aladdin had his story told, people weren’t looking for genies to just be hanging out in anything, you know.

Shaq: Do you want to talk about how many championship rings that I earned throughout my career in the NBA? coughFOURcough

Erin: I would like to talk about your 3-PEAT CD collection.

Erin: Oh, haha, Shaquille O’Neal!  You are so shy about your creative side of genius.  Do you want to talk about the chances of you playing Minor League Baseball next?

Shaq: That was Michael Jordan.

Shaq: I don’t know, doesn’t he say how in the song?

I would like to give a special thank you to Shaquille O’Neal’s angry ex-wife for his phone number and address.

Shaq, I will see you soon buddy.

* = None of these words are actually Shaq’s words. But without a doubt could be.