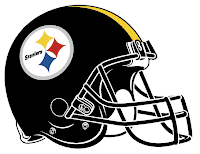 # 32 – Pittsburgh Steelers
The champion Pittsburgh Steelers took home the hardware this year. So how will this franchise approach the draft?
The Steelers are a well meshed team. They don’t have a roster full of superstars but more role players that have bought into a good scheme. I predict that Sixburgh will look to improve their offensive line in the first round of this years NFL Draft. Losing Alan Faneca proved to hurt them early in the season so look for them to strengthen that line with a good center or guard.

On the table this late in the round will most likely be two men. Alex Mack (no, not from Nickelodeon) and Max “Not Over But” Unger.

Alex Mack
C – #51 – California
Mack is a 6’ 4”, 316 lbs. Athlete. Just in his senior year, Mack posted the following awards and accolades:
Draddy Trophy – College Football’s top scholar-athlete
Pac-10 scholar athlete of the year
First Team All-American by Rivals.com
Morris Trophy – Pac-10 Best Lineman
Rimington Trophy Finalist – Best Lineman in College Football
Obviously size matched with his knowledge will produce a great fit for this organization. Keep an eye on his speed inside and his footwork during the combine. Look for him to replace G Chris Kemoeatu or fill in for veteran Center, Justin Hartwig.
Max Unger
OL – #60 – Oregon
Unger has a MOTOR. He’s got some of the best hands for an offensive lineman and has a great ability to climb to the second level and seal a linebacker. His 6’5”, 300 lbs frame gives him a great ability to control the interior line. He was also considered a finalist for the Rimington trophy but also received attention as a finalist for the Outland Trophy which is award to the nation’s top interior lineman. He also started 51 consecutive games displaying his durability.
*THIS JUST IN*

Alex Mack will NOT be participating in the 2009 NFL Combine due to a sprained ankle he suffered on Monday.

Tomorrow is #31, the Arizona Cardinals…