Skip to content
Olympics
August 16, 2008 Austin
This just in…
(For those who were just born yesterday or for those who have been living in a cave for the past few years)
…but,
Michael Phelps is AMAZING! 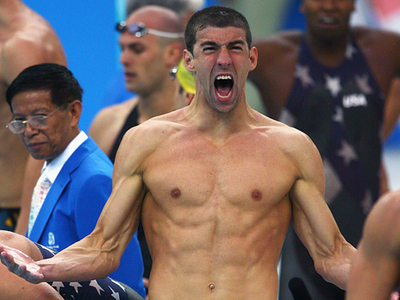 Tonight Michael Phelps won his 7th Gold Medal in as many races. Which, I guess isn’t too hard to do if you think about it. I mean, it HAS already been done before.
However…
Tonight was probably one of Phelps’ most exciting and nerve racking races. For those who didn’t get a chance to see it, Michael Phelps won the 100 meter Butterfly by one one hundreth of a second.
That’s right, 1/100th of a second.
Thats 0.01 seconds.
That’s like (and say this real fast): From now to now.
Not even that, it’s like: N to Now, NaNow, NNow!
You take longer than one one hundreth of a second to blink.
And that’s what Serbia’s Milorad Cavic lost by.

Think about it… You train everyday of the year for four years straight to win an Olympic Gold Medal and you lose by a nose. Not a Pinnochio nose but this kind of nose. How will Cavic sleep at night? Knowing that he could have wiggled his toes and it would have given him enough burst to be a hundreth of a second faster. If any friends or family members of Cavic are reading this, please have him visit this website immediately.
But anyway, enough about the loser.
We here at Corker Bats want to celebrate the winner. The sep-winner, Mr. Phelps.
The guy is amazing, incredible, invincible. He is indescribable. Even though I just did.
Is he even human? Because I would not be surprised if I saw Elijah Wood on the side of the pool getting him to swim faster.
Although, you could call Michael Phelps a movie star also. I mean he did have a few small cameos in the television show’s 2006 remake movie, Miami Vice. Don’t remember him in the film? He played the boats.
I also would not be surprised if he showed up late to a race because he was finishing up a meeting at The Hall of Justice with the rest of the Justice League.
Side Note:
I have always wondered what Aquaman’s superpower was other than swimming fast, and now I know…
He defeats Chinese and wins gold medals.
A few other tidbits about the legend:
I almost feel like the US is cheating for having him on our side. But it’s great isn’t it? Michael Phelps has become such a BIG deal all over the world!
To reference that for you:
Asian Comparison – Michael Phelps is bigger than Godzilla!
American Comparison – Michael Phelps is bigger than Brett Favre!
Tonight he attempts to be the only Olympian in Olympic history to walk away with 8 gold medals. By now, he is just collecting medals. Kind of like how Brangelina is collecting kids! His final race is going to be amazing. The whole world will be watching. There is so much riding on this race.
But not to worry. There is no way he will lose! The odds of Phelps losing this race are the same as the Patriots losing to the Giants in the Super Bowl…
Wait…
Oh jeeze.
Anyway, best of luck to Michael Phelps in his pursuit of breaking records and making history.
Tonight’s race is going to be
PHREAKIN’ PHUN!

2 thoughts on “Phor All Phelps Phans”