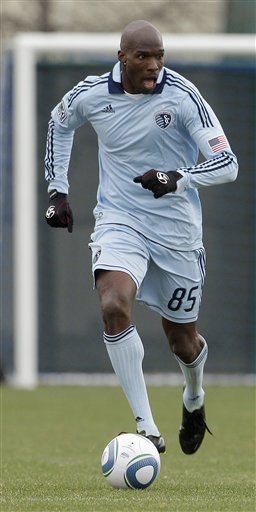 With the NFL in disarray over CBA’s and lockouts and hot dog prices, Chad Ochocinco found a new way to pass the time: Soccer.

Over the years, the Cincinnati wide-receiver has openly talked about his love for the sport, and last week he decided that instead of staying inside his mansion and playing his PlayStation Five (won’t be released to regular people for another three years), he’d just go try out for an MLS team.

Sporting KC just so happened to be looking for players, and I’m sure they didn’t mind the extra publicity either. His trial began March 23, and on the 25th he played in a reserve game where he did absolutely nothing except try and remember how to play soccer. According to NBC Sports, “It was his first organized soccer outing since the 10th grade.”

Maybe we should’ve seen this coming. The guy did kick an extra point during a 2009 preseason game against the Patriots, and apparently, he was a pretty good soccer player as a kid. But just like every other super-athlete in the U.S., he ended up going pro in a sport where players don’t have to get part-time jobs during the off season. I’m sure he would have enjoyed bagging groceries or trimming hedges a few months out of the year, but I bet he’s OK with just having millions of dollars instead.

All in all, I’m glad he tried out. I think that people are getting tired of hearing about the lockout, and it’s good to see #85 bringing some fun back into NFL headlines. I’m sure he won’t make the team, but at least he went for it, and at least now we’ll always have pictures of him in short shorts.