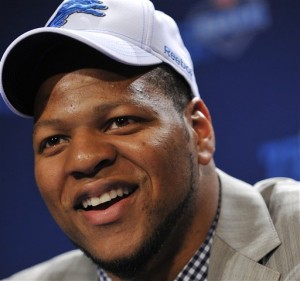 Nebraska defensive tackle Ndamukong Suh smiles as he responds to questions during a news confrence after he was selected as the second pick overall by the Detroit Lions in the first round of the NFL Draft at Radio City Music Hall Thursday, April 22, 2010, in New York. (AP Photo/Stephen Chernin)