A little over a week into the MLB season, players and teams begin to get into the routine of things, setting up for the long summer ahead. But others aren’t having such an easy time. The beginning of a sports seasons brings along new hopes, dreams, and the age old jokes that end with the phrase, “this year.” For example, a player hits a home run in his first at bat, and he is “on pace for 162 home runs.” A pitcher throws a strike on his first pitch, and he “hasn’t thrown a ball all year.” 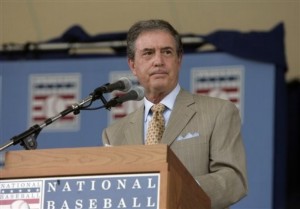 Denny Matthews, announcer for the Kansas City Royals, is a fan of the phrase, saying in a recent interview that, “stuff is always happening.”

But as numerical statistics begin to flatline and average out, Matthews is having a hard time letting go of his joking ways, creating often less-funny, long winded statements, such as:

“…and with that strike, [Royals pitcher Brian] Bannister has now thrown one hundred and twenty seven strikes on the season, putting him on pace to throw four more strikes this year than last year! And batters have only hit two home runs off of Bannister all year, which means he may give up one less home run this year!”

When asked if he planned on ending this joke anytime in the near future, Denny Matthews babbled something about the Hall of Fame, sneezed, and then asked if I would like to watch Good Morning Vietnam.