Get caught up on what you’ve missed thus far: 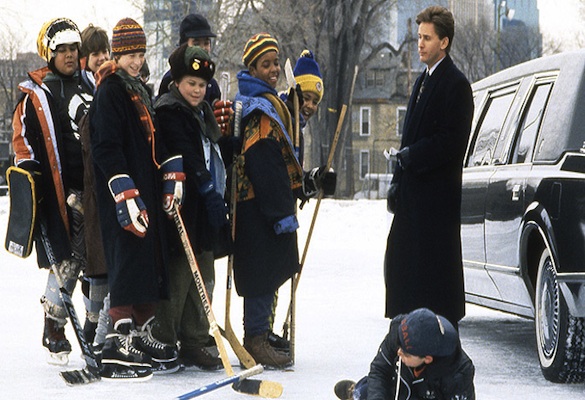 Coach Bombay lands on the ice, just short of Charlie and the referee, re-aggravating his old minor league injury. He looks up at Charlie, hoping that he hasn’t forfeit and given up the game, giving up Rosa and her freedom…

Charlie looks down at his coach:

Charlie: Why the hell did you just dive onto the ice?

Bombay: Because Charlie, we can’t give up. We have to win this game. For Rosa, and for America.

Charlie looks out into the new crowd of American supporters.

It’s pretty amazing, when you consider the time frame of everything, just how quickly they were all able to make it from Minnesota to Mexico City.

Charlie: OK, I get all that… but you’re like 60 and you just DOVE ONTO ICE… can you even move right now?

Bombay: Not really Charlie, not really. I definitely broke at least one leg and possibly a hip. I think I can feel my stomach bleeding inside of me too.

Charlie: That’s real bad coach… I wasn’t even about to forfeit, either.

Coach Bombay is still on the ground because he can’t move from his waist down.

Bombay: Charlie, you don’t have to lie to me. I’ll always be proud of you.

Charlie: No, coach you don’t understand. That’s not what me and the ref were talking about…

Charlie kneels down next to the broken coach and whispers something into his ear.

The coach gives him a look of shock and disbelief. A look that says:

Bombay: Generally, I trust you, but I only kind of trust you right now.

Then he gives him a look that says, “If I don’t get to a hospital within a few hours, there’s a good chance I’ll never walk again.”

Charlie helps coach Bombay up and skates his frail, old man body over to their bench.

Charlie’s teammates aren’t sure what to do or say so they skate over to join their captain and newly crippled coach.

Team El Chorizo, also unsure of what to do, just starts speaking Spanish to add authenticity to the scene. (There are no subtitles because we can’t afford them).

Charlie: You guys ready to do this?

Fulton: I don’t know, Charlie. We thought we were, but look at those guys. They’re terrifying.

Averman: Yea Charlie. If we wanted to get man-handled, we could’ve just asked Fulton to call his friends… ZING!

Charlie: So you’re telling me that we came all this way just to quit? All this way to let our friends, our fans and our families down?! Not me. No, I came here to win, even if that means playing the cartel-funded, underground black market hockey team, “El Chorizo,” all by myself.

Silence falls over his teammates.

Charlie: AND… I talked to the ref and he agreed to throw the game if we smuggle him back into America with us.

Charlie: Put your game faces on, Ducks. Let’s pour some sour cream on these burritos!

Everybody stops what they’re doing and just stares at Charlie.

0 thoughts on “Mighty Ducks 4: Life Off the Ice – Part VIII”