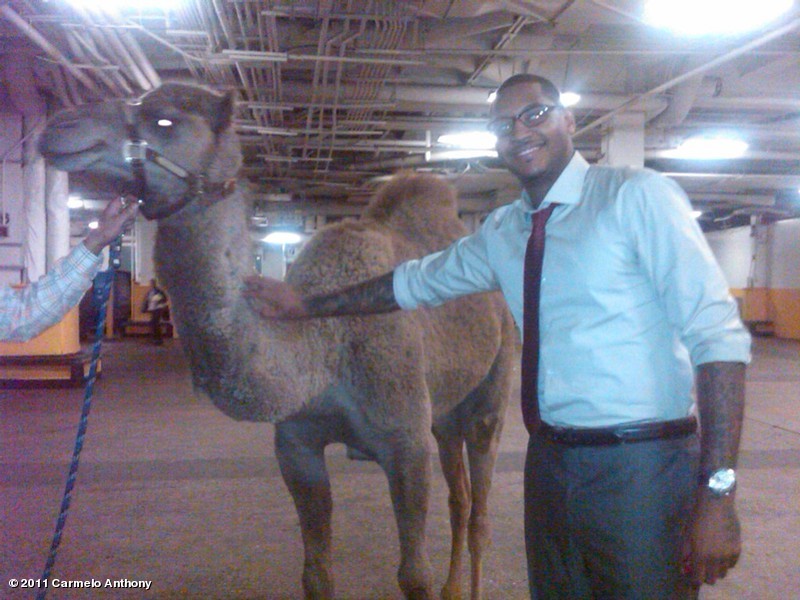 Carmelo Anthony has a pet camel.

I just thought you should know that. Here’s what Carmelo had to say via his “WhoSay” account (I have no idea what a WhoSay account is):

“Everybody got dogs and cats as pets, I got a camel!”

Pretty cool. I guess I’d have a camel too if I were a millionaire. Either that or a miniature giraffe.

No word yet if the one hump animal responds to the name Camelo Anthony.

And making his 2nd consecutive appearance on LMBFWY, Dennis Rodman.

Ladies and gentlemen, Dennis Rodman is becoming relevant again. What did he do now? Well, if you remember last month Rodman had his Detroit Pistons jersey retired, by the Pistons. Tonight he will have that same number 10 jersey retired by another organization,

That’s right, for his 50th birthday party the, well, we’ll call them waitresses, will don his Detroit Pistons jersey (for a few minutes) and a jersey will be hung in the club, permanently. Rodman wants to pay tribute to the two loves of his life – basketball and women. (He actually said that.) And wait a minute. Dennis Rodman is 50 years old?

Charlie Sheen is expected to attend the party. And no, I’m not making that up.

CBS is losing the best announcer they’ve ever had.

After failed contract negotiations, Gus Johnson and CBS are parting ways. Gus is expected to join Fox Sports so me may have heard the last NCAA Tournament Gus will call. If the above video doesn’t get your blood flowing, you’re not a cool person and I don’t want to be your friend.

It is possible to pull off a Hail Mary in lacrosse.

I don’t like lacrosse. You shouldn’t, either. However, I did run across this video which is pretty awesome. Gonzaga defenseman Matt Borda nails a 80 yard shot from behind his own goal with 10 seconds left to win the WCAC Championship for Gonzaga.

There’s a man in heaven that isn’t happy. His name is Chuck Taylor.

In a move that needs to result in multiple firings and possibly jail time, the fine folks at Converse have decided to start manufacturing Chuck Taylor thong sandals. I simply cannot fathom a situation where it would be socially acceptable to wear a pair of these hideous, disgusting things. And did you know Chuck Taylor was born in 1901 and looks like this?