Skip to content
Let Me Be Frank With You
March 2, 2011 Frank 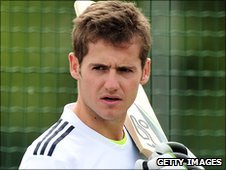 A topic that has been tossed around the sports world for years is “when will the first gay cricket player come out of the closet?” My inbox is constantly flooded with people asking me this very question. Well guys, the wait is over. Steven Davies has come out.

Maybe some of you are asking yourselves, “Wait, aren’t all cricket players gay?” My answer to that is yes.

Just remember you heard it here first, folks. So when people ask you “Where were you when Steven Davies came out?” You can say you were on Korked Bats.

Braylon Edwards ate himself this weekend.

Much like myself, Braylon Edwards celebrated a birthday this weekend in style. I rented out a cabin in Gatlinburg and brought a bunch of friends along. Braylon Edwards? He had a pretty similar get together at the MGM Grand in Las Vegas and had a cake made with an icing sculpture of himself (presumably chocolate) . I must say this is one of the ugliest cakes I’ve ever laid my eyes upon. Look at his fingers. He looks like a character from The PJ’s. And what exactly has Braylon Edwards conquered?

Unfortunately it is March and Black History Month ended two days ago. How do you mess that up? Even further, how do you chose that the two people you should put in the advertisement are Donald Sterling who is whiter than Indie music and Blake Griffin who is whiter than a black person?

Please watch this video. It amazes me. This guy just completely picks his nose, looks at his booger, and decides the best course of action from that point is to eat it. AND THEN HE DOES IT AGAIN. What?

Not only that, but he did all of this while consciously knowing there was a camera right next to him broadcasting the entire thing for the world to see. I hope he doesn’t get drafted for this reason alone. I know I don’t want a booger eater on my team.

Seriously, what is the advantage of eating a booger? Does it taste good? Is it good for you? Why would anyone eat a booger? Ahhhh!

I dare you not to laugh.

Triple dog dare with a cherry on top.