Skip to content
Let Me Be Frank With You
February 16, 2011 Frank

Auburn is destined to get in trouble before long.

In what just may be the dumbest tweet by an athlete in 2011, Auburn football player Jordan Spriggs came out with this gem:

Now, I’m not saying the idea of paying for someone to write a paper for them is the issue here. I actually made $40 senior year at UT for writing a guy’s final paper for him. He got an A. Does that make me in the wrong or just him? Who cares. Take my degree from me. It’s proven itself worthless thus far in my life anyway.

But with the shady Cam Newton deal looming over the program, one can only shake their head at a player going public with his offer to pay for paper writing.

Hannah Montana. Nate Montana, a former quarterback at Notre Dame has decided to transfer to a school I didn’t know had a football team, Montana. How did I not know? Because they are an FCS team thus I’ve never needed to know they exist.

Considering the randomness of this decision, no one can tell me he didn’t choose the school on the name alone. Why do you think I drive a Ford Fusion (Ford is my last name if you didn’t get that)?

Fortunately for Nate, he can play for the name on the back of his jersey and STILL be a team player!

I don’t really know if his name is Mumford, but he’s the lead singer of Mumford and Sons and he performed at the Grammy’s the other night. Google him. He’s one of those look alikes you have to see a collection of photos of to appreciate the similarities. Or just watch their performance. It was pretty enjoyable and pleasing to the ears.

After learning Justin Bieber’s ringtone is Mike Gundy doing the “I’m a man. I’m 40.” rant, he decided to return the favor and use Bieber’s “Baby” as his own.

Either that’s true, or Gundy has quick wit when it comes down to permanently losing his man-card. 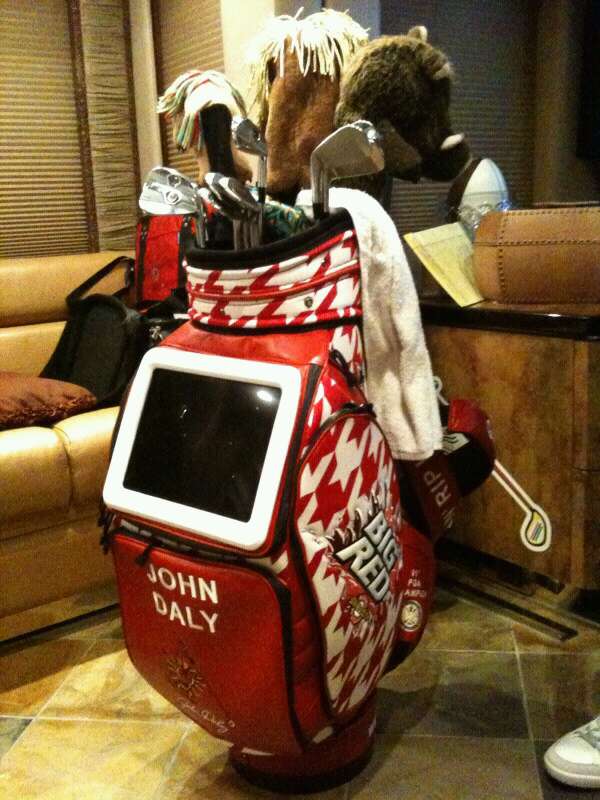 Now John Daly has the largest belly AND golf bag in all of golf.

The only entertaining man on the PGA Tour just got a whole lot more entertaining. John Daly tweeted the above picture of his new golf bag fully equipped with a flat screen TV. I don’t know what’s more awesome, the TV or the fact the bag is sponsored by Big Red. Actually, yea, yea I do. It’s the TV. What this picture doesn’t show is the built in kegerator directly below the television with a Heineken DraughtKeg (that’s probably empty. It’s five o’clock somewhere).