I told you so, Vol fans.
Lane Kiffin is a classless punk and a clown of a football coach. I have been saying this since the day he was named the coach at UT and became relevant in my life. He has been the subject of too many of my posts on this blog (most of which were met with great opposition), and I couldn’t be any more thrilled that he moved out of the state in which I call home and to a state that has a decent chance of falling into the depths of the ocean (God bless the San Andreas Fault). The timing, the 60 second goodbye, the cleaning house leaving nobody but Kippy Brown to hold down the fort, the reports of Ed Orgeron calling Vol recruits during the team meeting last night, the wife he doesn’t deserve, ect. all give credibility to prophetic words of Raiders owner Al Davis when warning the University of Tennessee of their hiring of Kiffin:
“Lane Kiffin is a flat-out liar. He lied to the team, he lied to the fans, and he lied to the media. He will try to destroy that university like he tried to destroy the Raiders”
So here you go Vol fans, a gourmet plate of crow. Eat it. I ate mine after a couple of years of defending Billy Gillispie without ammo. It’s not fun. You have been the only people in America who have liked Lane for the past year and now you should understand what the rest of us have known all along. And if there are any USC fans reading this, I don’t know what to tell you other than the fact that I’m glad I’m not you. What a nightmare hire. 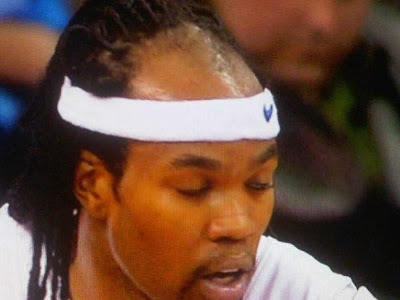 Alex Tyus has the most vile
hairline in all of sports.
I’m not really sure whats going on there but no matter how many times you look in the mirror and and think the headband hides your elevenhead, it doesn’t. I usually feel for people with large foreheads because I have a monster one myself, but Alex, that thing rivals the state of Delaware in size. And in case you don’t know who Alex Tyus is, he plays basketball for the Florida Gators.

ESPN 3D is going to
be the death of me.
In case you missed it, ESPN announced recently the development of a new network, ESPN 3D. The new network will showcase at least 85 live sporting events during its first year with the first being a World Cup match on June 11. Thanks ESPN, as if I didn’t watch ESPN for a large enough percentage of my day you come out with something as incredibly exciting as this. And just FYI, my Avatar glasses didn’t work for the picture above so don’t try it and feel like an idiot like I just did.
This is awesome.
If this doesn’t win video of the year at the 2010 VMAs then I’m not going to watch them ever again. Actually, to be honest with you, I don’t think I’ve watched the VMAs since Will Smith’s “Big Willie Style” was fresh on the non-gangster rap scene. But still…

Conan > Leno.
Whoever was involved in the decision to move Jay Leno back to the prime time slot on weeknights on NBC is probably affiliated with the USC coach search committee. I’m not sure Leno has made anyone under the age of 83 laugh this decade. Conan obviously isn’t too happy about the decision and let his feelings be known the other night in his monologue where he “bit the hand that feeds him” by poking fun at NBC and taking jabs at Jay Leno himself. Here’s a recap and a few videos.