Skip to content
Let Me Be Frank With You
December 22, 2010 Frank

Who else is tired of listening to this guy talk? I used to just zone out when they talked about women’s basketball on ESPN much like I do when Barry Melrose talks about hockey. But ever since Geno started taking offense to the fact nobody cares about women’s basketball and pulled the gender card out referring to men’s basketball fans as “miserable bastards”, he has risen to hate status for me. What Geno’s teams have done and what John Wooden did are so unrelated I might as well compare my YMCA basketball championship as a child to Duke’s victory in this year’s National Championship game. There is no comparison. They are two different sports. There is no parity in womens basketball. It’s not nearly as competitive, physical, fun to watch, followed, or saturated with talent as its male counterpart. So Geno, shut up. You did not beat John Wooden’s record. Please realize your sport is boring and sports fans have a pretty decent alternative to watch this time of year: men’s basketball.

This wussification of America has got to stop.

So, a 17 year old wrestler at Buchanan High School in California has been charged with sexual assault and suspended from school after…wait for it…performing a wrestling move against a fellow teammate in practice. Don’t believe me? Here’s the link. Apparently the move involves grabbing the opponent’s butt cheek in an effort to gain leverage. If you’re going to call that sexual assault, you might as well call the whole sport of wrestling “sexual assaultism”. When are we going to stop this suing nonsense? I’m only 23 and already understand why our elders used to say, “back in my day…”. This hypersensitivity is getting out of hand. We’re all becoming wusses.

If you missed the nail in Brett Favre’s coffin Vikings Bears game on Monday night, you probably missed the most laid back “fan running onto the field” occurrence, maybe of all time. Watch as this guy just casually strolls up to a group of players and strikes up a conversation about who knows what. If anyone can find footage of how this guy made it all the way to midfield, please share with us the link. I’m sure it was the most suave strut mankind has ever seen.

The Islanders must really suck.

As eluded to above and in past posts, I don’t care anything about hockey. I wish that sport would just go back home to Canada where it belongs. But every now and then a funny story arises from the NHL and that’s the case with this little nugget. Last week, members of the New York Islanders visited sick children in hospitals around the Long Island area, a very kind and charitable act that outweighs the significance of sports tenfold. Well, some nurses took this opportunity to heckle the players for their poor play this season.

“We were visiting sick kids and giving them gifts,” defenseman James Wisniewski said, “and one of the nurses there was really pretty rude to me, Doug Weight and Andy MacDonald. She’s a season-ticket holder and saying, ‘Nobody wants to go to your games; you’ve been giving tickets away for free.'”

Moral of the story: Not only does hockey suck, but so do its fans.

Did anyone see this guy on Sportscenter last night?

His name is John Peckinpaugh and he has curly red hair which is worthy of a post in and of itself. But what makes Mr. Peckinpaugh so different is the fact he wears boxing headgear during games. He is in fact the first player in the history of college basketball to sport “Everlast”. John has already suffered 4 concussions this year alone. So, instead of sitting the rest of the year out and hurting his Indiana-Purdue at Fort Wayne team, doctors have decided to just strap a bulky helmet to his head and let him play on. Peckinpaugh had this to say about the whole situation: 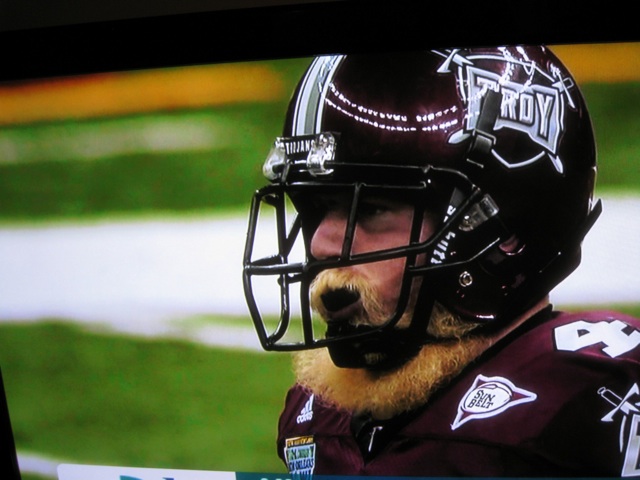 Will Groogans has college football’s beard of the decade.

If you watched Ohio take on Troy in whatever meaningless bowl they competed in this weekend, I hope you saw Will Groogans, Troy’s punter. Yes, this guy punts for Troy. I have nothing else to say.