Allen High School in Dallas, TX has approved plans on a $60 million football stadium. I’m not joking. The absurdity of this is truly remarkable. Look Texas, we get it. Everything is bigger there, big whoop. You’ve made your point enough times to us lowly 49 other states that just aren’t as big as you. At least we don’t have to be connected to Mexico. We win. The stadium will hold 18,000 fans with upper deck seating, have a video scoreboard, and a parking lot large enough for 4,500 cars. Now I love sports as much as the next guy and do follow recruiting. Thus high school football is somewhat relevant to me as it is with many people. But $60 million? For comparison’s sake, that is more than most college stadiums. $60 million will be spent at ONE high school for a bunch of 16-18 year old boys.

Texans take their bass fishing too seriously, too.

For all you millions of readers who complain that we don’t cover enough bass fishing, you’re welcome. Competitive fisherman Robby Rose was caught cheating in a bass tournament after lodging a 1 pound rod into the belly of the fish he caught ultimately winning the competition. As a result, the Texas Parks & Wildlife Department not only disqualified Robby from the tournament, he went to jail for 15 days since the grand prize for winning the tourney was a $55,000 boat. That’s a felony. It makes me wonder how different sports would be if this was a common practice among all professional sports. What would be the jail sentence for Korking a bat? 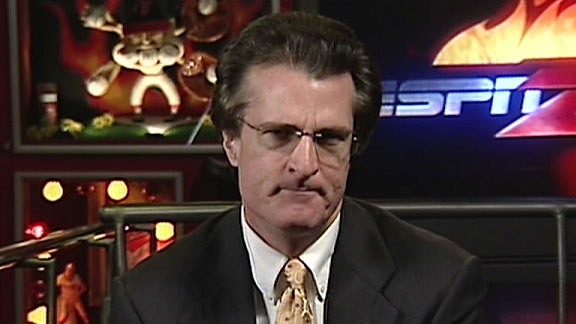 On Monday, this man will apply for unemployment.

Obviously the NFL draft begins tonight bringing full meaning into Mel Kiper Jr.’s life. If there is a more specialized occupation than the gig Mel somehow landed and has been doing for years, I’d like to know it. His whole life is spent concentrating on a stretch of 3 days in late April in which he is usually wrong about. How lucky is he? Since nobody in the known universe has ever seen this man’s face in the months of May, June, July, August, September, October, November, December, or January, it begs the question: what does he do? You can answer that question after the one I just asked about Korking bats. (I’m looking at you, Will)

For all the NFL teams just dying for an overweight, slimy mullet wearing, horrible motorcycle driving, repeat sex offender and rapist with a difficult name to spell, I found your guy. He’s the one pictured above drinking like a champion.

The greatness of March Madness lives on!

This is usually the section of the post where I talk about something really random that has nothing to do with sports. You probably don’t know that because you have never made down the page this far on one of my posts. I could say anything here and nobody would read it. I STILL WET THE BED! Haha, suckers. Nobody’s going to find out my secret. But if you are still reading this, I better change the subject so maybe you’ll forget to tell all your friends about my problem. After much talk about expanding the NCAA Tournament to 96 teams, the NCAA will instead only expand to 68. This is HUGE news for college basketball lovers (that’s everybody, right?). Instead of a watered down version of a once great sporting event in which the accomplishment of making the tournament would become not much of an accomplishment at all, we will only see three teams added. That’s not all the good news I’m bringing to you free of charge on this Thursday afternoon. TBS, TNT, and truTV will all show games along with CBS so that every single game of the tournament is broadcast nationwide! I can’t wait. Goodbye to watching games on laggy internet connections.