The 2010 NBA All-Star Slam Dunk Contestants were named today. Reigning champion, Nate Robinson leads the squad of non-superstars, as he will try to become the first ever 3 time champion of the contest. The other competitors will be Shannon Brown (who actually can FLY and is my early favorite to win the contest) of the Los Angeles Lakers, Gerald Wallace of the Charlotte Bobcats, and the final spot is going to who ever wins a dunk contest at halftime of the rookie game. The two competing are Eric Gordon of the Los Angeles Clippers and DeMar DeRozan of the Toronto Raptors.

Did I put you to sleep yet with that list?

Frankly, I’m a little upset. I’m upset for a couple reasons. Those reasons are:

Now the first two reasons of this list are self explanatory. I don’t need to waste any time of this post explaining to you why Dwight Howard or ANY Indiana Pacer needs to be in the contest. Those two facts are a given.

However, I’m really burning on that #3 reason.

LeBron James, arguably the best player in the game right now, without a doubt one of the greatest players of this generation, will not compete in this year’s Slam Dunk Contest at Cowboys Stadium in Dallas, Texas.

Hear me out first, I love LeBron James. I believe he is the best player in the game. He just barely nudges out Kobe in my opinion, but that’s another topic for another day. I always pull for the Cavaliers in the playoffs and if there is going to be another Michael Jordan, I want it to be LeBron James.

But him backing out of the contest that he already verbally agreed to really makes me mad.

Some may say, why aren’t you mad at Kobe, Dwayne Wade, or Yao Ming? Well, Kobe and Wade never told the world they were going to be in the contest. And as for Yao…Well, it wouldn’t be fun to watch someone dunk without them having to leave their feet. (The NBA really needs to do something about the lack of excitement from their participants, because I’m going to be honest, the Dunk Contest is already in the hot seat with some of the writers of this blog.)

“Right now I’m preliminarily putting my name in the 2010 contest Saturday night. LeBron James is saying in 2010, in Dallas Stadium, [preliminarily] he will compete.”

I know I wasn’t the only person who got more excited than The Pointer Sisters, when they heard that quote.

In fact, there are only things that LeBron could have said that would have gotten me MORE excited than the thought of him being in the NBA Slam Dunk Contest. Those three things are:

However, he didn’t say those things. He said he was going to be in the All Star game. And in doing so, I, along with everyone else, got excited only to have the rug pulled out from under me months later.

The NBA Dunk Contest could learn a thing or two from MLB’s Home Run Derby. Think back to the best home run hitters of the past two decades (steroids/fast food sandwhiches or not). Every single one of them competed in the Home Run Derby at least once. Pujols, Bonds, Sosa, McLiar, err, I mean McGuire, Griffey, A-Rod, and who could forget the great Alex Ríos?

With the exception of Dwight Howard (who arguably became as popular as he is today because of his success in the dunk contest), the last superstar to compete in the dunk contest was Vince Carter in 2000. And frankly, that was the best dunk contest I have ever seen. Sure, these past two years have gotten interesting with the props and costumes, but to me, nothing has capped off what Vince Carter did ten years ago. If the history of The Slam Dunk Contest was the TV show Seinfeld, the 2000 Slam Dunk Contest would have been The Marine Biologist episode.

At least the Home Run Derby has an excuse to not have big names fill the list each season. Historically, after a player competes in The Derby, his home run total and batting average takes a serious hit in the second half of the season. Not to mention they risk getting hurt and fatigued with how they alter their swing to muscle balls out of the park.

What is the excuse for the NBA? Or for LeBron?

“Oh I don’t know about the Dunk Contest. I don’t want to get hurt doing the stuff I do before and after practice [probably] everyday.” Or is it, “I want to keep my focus on helping my team, the East, put up 188 points so we can beat the West this year.” Or maybe even, “I just don’t want to break a nail.”

Heck, what do you have to lose, LeBron? It’s not like you’ll be going up against someone and everyone in the contest are professionals, so you don’t have to worry about some college kid dunking ON you again.

At very least, have LeBron’s puppet compete. That would bring in great ratings. I mean heck, just look at Sesame Street. They have puppets on the show everyday and they are still on the air. 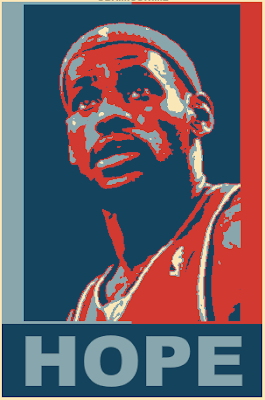 I believed in words like CHANGE and HOPE to describe the idea of one of the game’s biggest superstars competing in one of the game’s most fun events, but like our country’s economic problems, those words proved to be just that, words. All I’m saying is that LeBron James not competing in the Dunk Contest this season after telling the world that he would is a big pile of Rosin.

The NBA Dunk Contest needs more superstars in it EVERY year! And if they can’t manage to make that work, the contest could, at least, use more cowbell…

One thought on “LeBron Lames”