MY MOTHER’S BASEMENT — The scandals at night, are big and bright, deep in the heart of Texas. Ok, that was a lame opening line. Let me start over. Remember the Alamonies. That was dumb too and didn’t even make sense. I’ll just be blunt with my opening line. Texas is to blame for all the scandals in NCAA athletics. There. 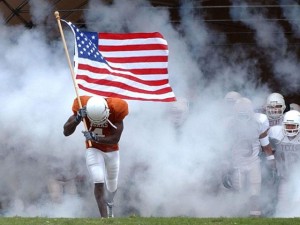 We have sources with valid evidence that the University of Texas is behind every scandal that has come up in the past decade and quite possibly ever. Our sources, a guy named Wes Hoecker, has asked to remain anonymous. So out of respect for him, we won’t give you his name, address, or AOL screenname, SoonersFan1948, which leads us to believe he is either an Oklahoma fan or just a fan of things getting done quicker. Either/or.

The University of Miami, according to Yahoo! Sports, is on the verge of getting hit with massive violations from the NCAA for a scandal involving a very-wealthy Miami booster, Nevin Shapiro. When you think about it, this is all ironic considering you can’t spell “scandal” without NCAA. However, when you think about it more you waste your time if this scandal does not directly affect you. That’s why we want to cut to the chase and give you all our opinion based on the evidence from our anonymous source, Wes Hoecker.

Let’s start with Nevin Shapiro. Nevin is the main person behind this scandal. Scandal? What other scandal comes to mind? Oh yeah, Enron. Where was Enron headquartered? Houston. What state is Houston in? Texas. This next one should be easy. What state school is located in Texas? Oh what’s up? The University of Texas in Austin. Evidence #1. 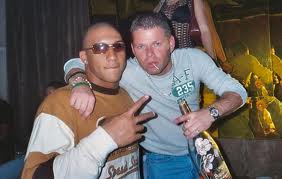 Nevin Shapiro (above, right) claimed to have spent $2 million on the Miami players and recruits from 2002-2010. Hmmm… the number 2. What state is the 2nd biggest state in the nation? Let me think… TEXAS! Evidence #2.

Let’s move on now to the Yahoo! Sports Senior Investigative Reporter who broke this Miami Scandal story, Charles Robinson. Don’t be surprised if that name doesn’t sound familiar. He’s just a reporter for Yahoo! Sports. However, there is also a Charlie Robinson who is a country singer. He was married to Erin of The Dixie Chicks, he was a judge on the first season of the not-so-hit TV show Nashville Star, and he played college football in the 1980s. And guess where he played college ball? Yup. Texas. Not kidding. He’s originally from Houston and plays many shows in Austin. Evidence #3.

This is getting creepy and logical isn’t it? Ok, maybe neither. But stay with me.

Charles Robinson graduated from Michigan State. Let’s go back to the night of December 22, 2009. Michigan State was playing basketball against the number two ranked team in the country and lost. That team they lost to was the Texas Longhorns. Evidence #4.

ESPN worked a deal with the University of Texas to create the Longhorn Network. The cost for the four-letter network? $300 million. Excuse me? Yes, you read correctly. Three-hundred million dollars. What do you do with all that money? Well, if you’re Boise State, you get air conditioning in your locker room. If you already have that luxury, you put some of that money in a ponzi scheme. Why? Because you don’t know any better. Nevin Shapiro was behind a ponzi scheme worth over three-times that. Wait. Texas… Nevin Shapiro? Yup. You guessed it. In cahoots. Evidence #5.

Speaking of the Longhorn Network. Texas A&M hates the Longhorn Network more than the Olsen Twins hate eating. Thus why they want to leave the Texas Conference Big 12ish Conference and if one school wants to leave, then the rest of the country wants to leave. A&M planned on jumping to the SEC. About 107 of the 108 non-SEC schools were rumored to go to the SEC. (Sorry, San Diego State) One of those schools was Miami. Let’s recap. Miami was rumored to go to the SEC because of a TV network that Texas is starting. Ok, you’re right, this one doesn’t make as much sense. But still. Evidence #6.

Here’s an easy one: Nevin Shapiro is in jail. Jail. Green Mile. A movie about a jail in Louisiana. States that border Louisiana: Mississippi, Arkansas, and Texas. Texas. Evidence #7.

Why doesn’t Texas ever want us to mess with them? Hmmm… Maybe because they’re behind every scandal ever? Including this Miami mess. Evidence #8.

Miami’s former head basketball coach and current Missouri head coach, Frank Haith, was photographed many time with Nevin Shapiro. He under a lot of scrutiny for his involvement with the whole scandal. He coached at Miami from 2004 until this past season. It was his first head coaching job. Before 2004, we believe it’s no coincidence that Frank Haith was an assistant at… [dramatic pause] …TEXAS! Evidence #9.

Who is writing this post about this Miami scandal? (Sorry, I guess I should have introduced myself earlier) My name is Austin. Texas is located in Austin, Texas. Ok. That’s probably just a coincidence. Plus, I don’t want to be linked to this scandal. My mom would be pissed.

I went to Texas one time. They kept chanting at me, “GET OUT OF OUR STATE!” Which reminded me of old people who often times yell, “GET OFF MY LAWN!” Huh, come to think of it, most old people retire in Miami. Chalk one up for us. Evidence #10

Andre Johnson is linked in this mess. Andre is now a receiver for the Houston Texans. The Texans! Guess who is obsessed with the Texas Longhorns? Yup, Texans! Evidence #11.

Back to Frank Haith again. Nevin Shapiro once donated $50,000 to the Miami basketball program at a fundraiser. Where was this fundraiser held? A bowling alley. Bowling! Wait. Nevermind. After going 5-7 last year, Texas probably doesn’t remember going bowling.

That’s all the evidence we were able to obtain. But we felt this information must get out as soon as possible. The information must be in the hands of the public before any other accusations are made. Remember, blame Texas.

If any of you have anymore evidence please email them to me: austin@korkedbats.com or tweet them to @KorkedBats