Well guess what, sports fans? Erin, The Ladies Room Korked Bats writer is somewhere in the Northwest wandering around Mount Hood as we speak.

Here’s the good news. If you prefer receiving your sports related news from a female, you’re in luck. Erin recruited me, her roommate MeLissa, to take care of the Ladies Room while she’s gone.

Now, self-admittedly, I don’t write a lot of blogs about sports (mostly since the SEC and I dated back in college and then had a nasty break-up involving a lot of passive aggressive Facebook statuses), but in light of the NFL season officially being back on, this felt like the perfect time to write.

Here’s the problem with the NFL: it’s run by men (and trust me, there are lots of reasons I like men, but compromise and sacrifice for the good of others aren’t always their first thoughts). So imagine an NFL run by women. It could be magical. Read on. 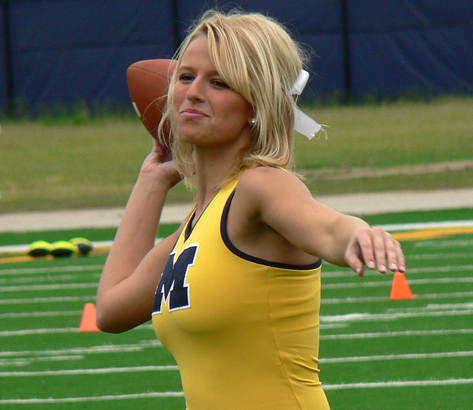 1. Women would never let an NFL team wear a uniform with white pants. 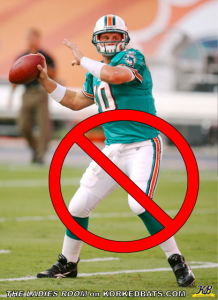 Why? Because the entire NFL season is played after Labor Day. Not to mention, white makes your butt look big. White makes it harder to hide underwear lines. White is unforgiving when it comes to dirt and stains. White pants aren’t helping anyone, okay? I’m looking at you, Miami Dolphins.

2. Women would make sure stadiums had salad options.

Can you invest in a past time that’s going to make you fatter? “Please, come spend weekend after weekend in our uncomfortable fold-down chairs in the snow. We have hot dogs and chips you can dip in yellow melted rubber! Restroom? Well, we have a giant trough with constantly flowing water in it. Hope that works!” Would you ever go to someone’s house on a regular basis that had a trough in their bathroom? Probably not. If stadiums are going to be your second home during football season, women will make sure there are salad options on the menus and throw pillows in the stands. It just makes sense.

3. Women would have cheerleaders that lead us in cheers.

I think the concept of a cheerleader was lost somewhere between women being forced to hide their ankles and women burning their underwear. Let’s come back to a time where cheerleaders are actually leading their fans in cheers okay? It’s nice that they can flip. I’m impressed that they can build a pyramid, I really am. But I also need to be led in supportive chanting for my team. What if I start spelling out “Titans” while they guy next to me is yelling “go-fight-win”? Complete pandemonium. Our team now has half a stadium yelling gibberish at them. We need someone to guide us. To lead us. Maybe cheerleaders? Let’s put the scissors down and take a second from raising our hemlines to lead the fans in unison cheering. 4. Women would have better touchdown dances.

All touchdown dances would be Beyoncé’s All The Single Ladies dance.

Part of the reason we ladies can’t get into football is there is a lot of nonsense happening on the field. Men are hurling themselves at one another. There’s a lot of falling down. Sometimes we’re starting over from the middle, sometimes we’re not. What we need is an announcer who can explain it to me like American Idol or an US Weekly Magazine. I need the highlights. I need the juicy stuff. I don’t want to know about 1st downs or yardage. I want to know who hates who. I want to know who’s playing with a vengeance because they are in a bad mood caused by someone losing their dry cleaning. I want to know who broke up with who and got traded to another team. That’s going to keep me engaged. I don’t want to hear about a time out unless it’s for the underdog player to get called into the game at the last second, win it for us, and get carried out on the team’s shoulders. And I’d prefer it if their coach what Denzel Washington when that happened.

So, as you sit down to enjoy you first football game of the season, remember this is only a fraction of what your season could be like if women ran the NFL.

0 thoughts on “If Women Ran The NFL”