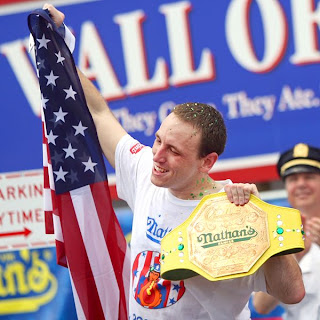 What would our nation’s birthday be without a Nathan’s Hot Dog Eating Contest on Coney Island? The fattest country on the planet just keeps getting fatter… and makes games out of it!

This year’s contest was a lot like last years (and the year before) as Joey Chestnut won with 68 hot dogs eaten in 10 minutes. That mark actually shatters his old world record set last year of 59 hot dogs (and buns).

Someone get the Pepto-Bismol out.

Furthermore, bragging rights for OUR contest stays within U.S. borders since Chestnut defeated arch-rival and six-time champion, Takeru Kobayashi, who is Japanese.

Finally, a little pay back for Pearl Harbor for the past three years!