This must be forwarded with the following thought: I think that Brett Favre is overrated, and I would rather have Dave Gerrad as my quarterback on my team this year. I do respect him and his career, but in my opinion he is not a top 5 QB (maybe 10), like everyone else thinks. That aside…

I know I am not the only one, but I know I am so ready for this Favre stuff to go away. Somehow this has been an ever bigger story than the Yankees and the Red Sox. This has been a great p.r. move by Brett.

Supposedly any press is good press, and if that is the case, then Favre has masterminded the greatest p.r. stunt in recent sport memory. I’d say this easily trumps A-Rod announcing that he is opting out of his contract in the middle of a World Series Game that the Yankees are playing in, or when the NBA announced their stupid dress code in the middle of the offseason, making everyone talk about their league.
I guess what I am saying is I think this has been no accident on Brett’s behalf. My view on this man has changed quite a bit. I do not buy into this ‘for the love of the game’ deal. I have come to realize this guy just loves the spotlight, hence the long delays in deciding when he would retire, the on field theatrics, always getting mic’d up, the

dramatic exit, and now holding an entire franchise hostage.
Brett loves attention. In my opinion, he has become drunk of it. This is out of control. I can understand if you want to play, but when does a guy does a guy begin to think that he is bigger than a sport.
Anywho, hopefully this is over. I spent this whole freaking day hearing about Favre, and hopefully now it is over for a while. Honestly, I kind of miss getting pissed about constantly hearing about two non-first place teams in baseball, and I hear some sports competition starts on the 8th, but that story has kind of disappeared.
In the meantime, HAPPY JET FAVRE DAY! 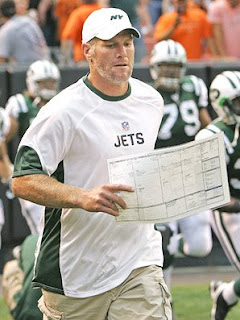