EA Sports, the makers of many popular sports video games, including their flagship game Madden for the NFL, has announced that Libyan dictator Muammar Gaddafi, often times referred to in his own country as the “king of kings” or a “dick,” will be the newest person to don the Madden franchise. EA Sports Representatives say they are taking the measure of placing Gaddafi on the cover to help “utilize the Madden curse to take down an unruly dictator.” EA continued, “and to be frank, our sales in Libya have been struggling.”

The Madden Curse comes up each year, the idea that whomever is placed on the cover of Madden that year will suffer through a jinxed year. President Obama contacted Madden about utilizing the curse last week, and hopes that the Madden Curse will continue its reign of terror now on Gaddafi. Obama is optimistic that this year’s curse will be an “extra cursey one,” even going as far as to say he hopes the Madden Curse “makes Gaddafi break his ankle and miss weeks of killing innocent civilians, and maybe he has less passing yards.” 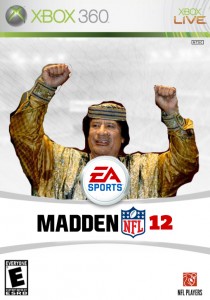