So after another busy weekend watching the entire first season of Hoarders, I decided to watch a baseball game.  Or at least the last five minutes of a baseball game.  The Mets were playing the San Francisco Giants.  I immediately hate the Giants because they have the same ugly colors as my rival jr. high did.  And as the Oregon State Beavers. Gross. If you are going to have gross orange as one of your team colors, you are asking for ugly fans. The Giants, much to my disdain, were winning while I wrote this.

In other news, the USA soccer team beat Brazil.  This is for those Americans who are actually interested in soccer, which is like eleven guys in Texas.  Oh, except it was the women’s World Cup.  So, this knocks down the eleven guys in Texas down to about 6 or 7 guys in Texas and adds like one guy that I talked to in Starbucks named Scott.  Thanks guys.

Let’s take a moment longer then we normally would to celebrate. 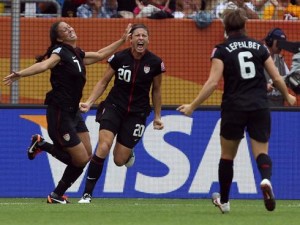 Back to the baseball game…

The gentleman warming up in the bullpin right now for the Giants, kind of looks like Zack Gallifinakis if Zack grew his beard just a little longer and ate one or two less cheeseburgers and bathed in a tub full of Just For Men.  Or that homeless guy that Adam Sandler puts in all of his movies. I found out that the bearded baseball player is a big deal.  People have signs for him.  Fear the Beard.  I guess this gentleman’s name is Wilson.  There was a small child wearing a beard in Mr. Wilson’s honor. Or maybe that kid just has a beard? They say kids grow up faster in California. 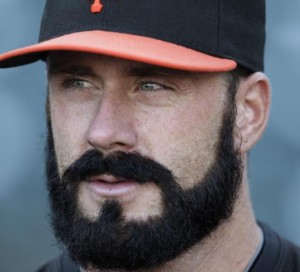 This guy’s beard can’t be real.  His beard is darker than the rest of his hair.

Shoot.  He just struck a guy out.

I haven’t seen a pitcher this good since Randy Johnson.

The Mets need to Fear the Beard. 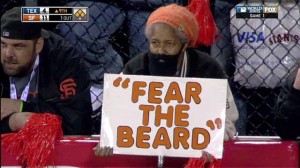 Why do the people of San Francisco feel the need to frighten fellow baseball teams with facial hair?

And why does the woman in the picture above look a lot like the terrorist the government killed a few months back? Or worse, she looks as if she is the illegitimate child of Osama bin Laden and Antoine Dodson.

Maybe there are other reasons to “Fear The Beard” other than his insane fastball.

Maybe he gets his strength from his beard.

Maybe he is really in the witness protection program, but maybe he was just too good at baseball to give up his dream, so the FBI gave him this sweet beard.

Maybe he keeps snacks in his beard because of his low blood sugar.

Maybe he keeps his snacks and his secrets in his beard.

If you know what Lindsey Lohan movie I just referenced, you win.

Unlike the Mets did. Good work Giants.

Oh, and good work ladies soccer, but who really cares. (Other then you, Scott.)