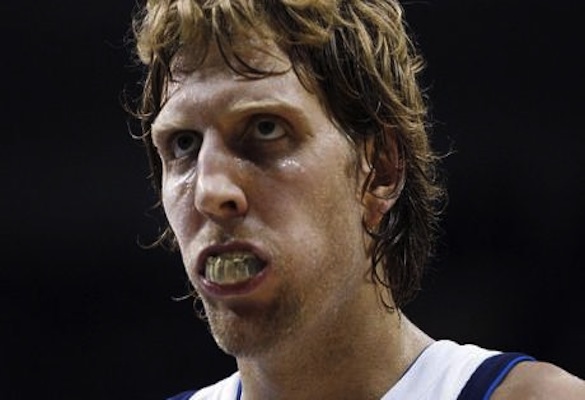 Oh, you didn’t know? Earlier today, Dirk Nowitzki announced that all of his shots go in the basket because he uses, “strictly trained, tiny invisible birds” to guide the ball into the hoop.

This makes a lot of sense, seeing how against the Oklahoma City Thunder his field goal percentage is .562 and I’m pretty sure that he’s only missed like one free throw this post-season. So, while the invisible bird theory does help to explain Nowitzki’s staggering numbers, overall I think there’s a lot more questions to be raised.

First of all, how do we know that these birds even really exist. Sure, the Mavericks power forward says that they’re real, but if they’re invisible, how can anyone confirm that they actually exist. I used to tell people that I had tons of friends growing up, but of course no one could ever meet them because they were invisible. Years later, I discovered that my so called friends were not real, and that I was just a super lonely kid. I’m just saying, if my friends turned out to be fake, the birds could be fake too.

Secondly, how would you even train invisible birds? I have three main problems with this: 1.) It would be hard to round them up and keep track of them (because they’re invisible). 2.) You couldn’t even tell if they were doing what you wanted them to (because they’re invisible). 3.) How would you even find them in the first place? It’s not like you could just go out into the woods and find invisible birds. You would need some kind of guide who specializes in finding invisible things and trust me, they don’t exists.

Finally, I’m tempted to think that this whole bird theory is just our German friend’s way of trying to stay humble. Can I be real for a moment: Germans have a weird sense of humility. My family is German, and it’s common knowledge among us that whenever something invisible comes into the picture, it usually just means that someone is being shy and not wanting to brag about their accomplishments. When my grandpa would give all of us kids presents for Christmas, he would always say that some invisible man named, “Santa” was the one responsible. I recently found out that this was just his way of trying to not take all of the credit.

When I was 15 and all of my Mary-Kate and Ashley movies suddenly disappeared, my parents told me that “invisible movie elves” must have taken them. As it turns out, it was my parents who threw them away to help me grow up and make friends, and they just didn’t want to take credit for it. Their plan didn’t work, and I didn’t make any friends, but at least they tried.

I see what you’re doing Dirk, and I get it.