Skip to content
NFL
March 10, 2009 Guest
As a part of the Bulldog faithful it pains me to bring you this piece. However, as my duty to America and the Detroit Lions has increased tenfold, I have to bring something to their attention. 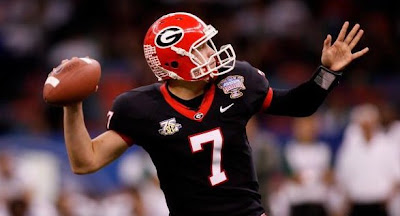 Matthew Stafford has a LIVE ARM. There is no one questioning his strength. He can throw a ball over them mountains over there. Stafford has a great football mind especially on pre-snap reads but as soon as that ball is snapped, you’ll see this good ole Georgia boy lose some key reads. If Stafford goes to the Lions and they don’t make an effort to improve their offensive line, look for him to be as lost as Lars.

First of all, thank you to Steven Reese for bringing this to my attention. Detriot, do you want the face of your franchise for possibly the next 15 years looking like Sloth from the Goonies? His face on billboards along I-75 promoting the Lions could create massive car pile-ups and wrecks and that just leaves more work for MDOT. I mean, you do want ticket sales up, correct? I guess it might be better for him if he gets pounded like David Carr from the White Glove Era.

Take this as you may Schwartz. But if you can hear me, stick to what you know best. Strengthen the Offensive and Defensive lines and let Kevin Smith hollar at a few dances.

Your Friend,
Davis – “The NFL Guy”

P.S. If you don’t want to take my advice, then you could always just go and draft another wide receiver. What do you have to lose?

One thought on “Dear Detriot, He’s Not That Good”