Hello friends and family (I can say that since that’s apparently the only people who read my posts). After analyzing our traffic numbers last week, it has come to my attention that, well, my weekly “Let Me Be Frank With You…” post is among the least popular on this site. We wont dwell on that issue and the fact my self esteem has been steadily plummeting to levels unseen since that time I defecated my pants during a second grade field trip to Mammoth Cave. العاب تربح مال Instead, I will accept the fact I am terrible and nobody likes me and move on. العاب النت الحقيقيه

But just know, it’s all your fault guys. You did this to me.

So, I’m trying something new: focusing on one topic per post instead of the usual 5. لعبه القمار روليت On top of that, I get to try out my skills as a corny, play on words title creator. (Pretty good one today, huh? Get it? Cele”break” good times. Yea, you get it.) 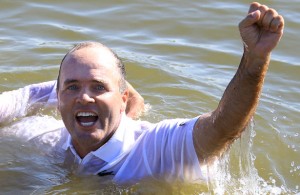 Thomas Levet won the French Open this weekend. So it only makes sense that to celebrate, he jumped into the pond. What happened after that is truly fascinating. He broke his shin, rose to the surface, posed for heroic pictures, giggled, and walked back to land. This man either has incredible pain tolerance levels, or is not a fan of embarrassing himself in front of thousands. Had this been a soccer player I think he’d still be violently rolling on the ground giving fans the impression death is imminent. Watch:

Count New Orleans Zephyrs’ first baseman Josh Kroeger among those who didn’t learn from Levet’s mistake. Following a walk off double by his teammate, Kroeger does his best Bill Gramatica and severely blows out his knee jumping for joy. (After spending 30 minutes trying to figure out a way to embed this video into this page I have given up. Just click that picture to the left.)