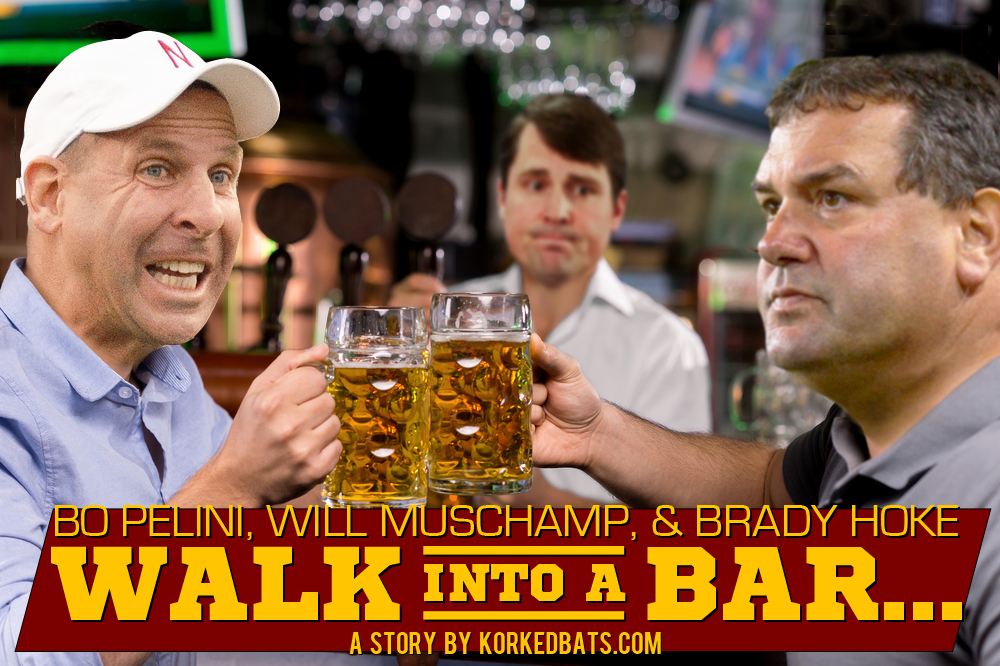 [Bo Pelini walks into a bar with Will Muschamp standing behind the counter cleaning glasses, and Brady Hoke sitting at the bar, playing a Nintendo DS.]

Will: [annoyed] Do you always have to yell, Bo?

Bo: I CAN’T HELP IT! I HAVE A CONDITION. I’M ALWAYS PISSED OFF AT EVERYTHING, ALWAYS.

Will: I believe that condition has been diagnosed as “coaching at Nebraska.”

Bo: SHUT UP, WILL! [looks around] SO THIS IS YOUR NEW PLACE, HUH?

Will: Yeah, I was able to get a jump start on my job search after botching that South Carolina game. I pretty much knew I’d be gone by seasons end, so I used my buyout money on a down payment for this bar. The hours are a lot better, and I never have to work overtime.

Bo: OH COOL! YOUR BAR EVEN HAS NORM FROM “CHEERS”!

Brady: What’s up, Brad? [pauses his Nintendo DS and waves]

Bo: OH! SORRY ABOUT THAT. [leans into to whisper to Will] WHY DID HE CALL ME BRAD?

Will: [whispers back] Brady isn’t the sharpest tool in the shed… In fact, he’s probably the dullest.

Bo: [keeps looking around] I DON’T KNOW, WILL… I ALWAYS IMAGINED A MUSCHAMP-OWNED BAR WOULD BE DIFFERENT.

Bo: WELL, JUDGING FROM YOUR STINT AT FLORIDA, I FIGURED THE COUNTER HEIGHT WOULD BE DIFFERENT.

Will: [confused] What do you mean, Bo?

Bo: YOU KNOW, I JUST FIGURED YOU WOULD’VE SET THE BAR REALLY LOW.

Will: [rolls his eyes before changing the subject] So, I’m guessing you guys are here because you guys lost your jobs too, huh?

Bo: I WOULD’NT BE SPENDING THIS MUCH TIME IN A BAR IF I WAS STILL HEAD COACH AT NEBRASKA.

Will: Yes you would.

Bo: OH YEAH, YOU’RE RIGHT! I WAS MISERABLE AT THAT JOB! HAHAHAHAHA!

Will: What about you, Brady?

Brady: Yeah, I lost my job too. My wife is going to kill me. I just don’t know what I’m going to do now that my entire schedule is free?

Will: What are you talking about? You should already be used to a light schedule. You coached in the Big Ten.

Bo: HAHAHAHAHAhaha… [realizes he, too, coached in the Big Ten] hey, wait a minute.

Bo: [changes the subject] SORRY TO HEAR YOU LOST YOUR JOB TOO, WILL.

Will: Yeah. I don’t get it. I got Florida bowl eligible. Isn’t that enough for the University of Florida anymore?

Bo: ARE YOU KIDDING RIGHT NOW? BOWL ELIGIBLE? I WENT 9-3! NINE AND THREE! MY THREE LOSSES WERE ALL TO RANKED TEAMS. AND I GOT FIRED. FIRED! I CLEARLY HAD NO REASON TO BE LET GO! HELL, EVEN MY FAKE TWITTER ACCOUNT WAS PRODUCING GREAT RESULTS!

Brady: [breaks the silence] I lost to Rutgers!

Will: [pats Brady on the back] That’s great, Brady! Good for you.

Bo: SO, WILL, HOW’S BAR LIFE TREATING YOU?

Will: Well, I’ve pretty much been living in a bar since losing to Georgia Southern. So it’s not entirely new to me. The only difference now is that I’m no longer living off kid’s tuition money. Now, I live off tips.

Bo: HERE’S A TIP… YOU SHOULD’VE STARTED TREON HARRIS EARLIER IN THE SEASON.

Will: [throws a towel at Bo]

Will: [sighs] I just don’t know what the next step is… for any of us. Have y’all thought about new jobs?

Brady: I’m going to go pro in something other than sports.

Brady: I want to be a basketball umpire.

Will: Do you mean a basketball referee or a baseball umpire?

Bo: THOSE ARE BOTH STILL IN SPORTS, BRADY! I THOUGHT YOU WERE GOING TO “GO PRO IN SOMETHING OTHER THAN SPORTS!”

Bo: [shakes his head, looks at Will] I DON’T KNOW WHAT I’M GOING TO DO.

Will: You could work in anger management.

Bo: I DON’T KNOW, I FEEL LIKE A JOB LIKE THAT WOULD MAKE ME PISSED OFF ALL THE TIME.

Will: Oh, right. Because you’re not already. [looks away] Well… you could go on tour with GWAR or Linkin Park?

Bo: I’VE CONSIDERED BOTH, BUT I DON’T LIKE HOW MUCH THEY YELL.

Brady: You could work as a hamster.

Bo: UGH. I CAN’T THINK ABOUT IT ANY LONGER. MY HEAD HURTS.

Will: Be careful. If your head hurts bad enough, Brady will put you back in the game at quarterback.

[Will and Bo share a look, having no idea what Brady is talking about.]

Will: Did you hear they already hired my replacement? Jim McElwain out of Colorado State is taking my job.

Bo: UGH. ANNOYING. YEAH, THEY GOT MIKE RILEY TO TAKE MY JOB.

Will: That should be a good hire, right?

Will: Riley’s a nice guy though, right? I mean, he’s like a hippy, but really nice.

Bo: YEAH, I BET RILEY HAS ALREADY TURNED MY OFFICE INTO A HOT YOGA STUDIO.

Bo: YEAH, HE’S BEEN DEAD FOR OVER THIRTY YEARS.

Brady: [instantly stops crying] Wait, did I say Bear Bryant? I meant to say Michigan is replacing me with a toaster.

Will: This is like after your girl breaks up with you and starts dating another guy no more than a week later.

Will: Brady, you’re married to a girl.

Brady: Tell it to the judge!

Bo: YOU KNOW WHAT? I’D LIKE TO MAKE A TOAST. FOR THE THREE OF US.

Brady: You should use the toaster Michigan replaced me with.

Bo: HERE’S TO US LIVING UP OUR UNEMPLOYED LIFE IN HOPES WE LAND BACK ON OUR FEET QUICKLY!

Will: I’ll drink to that!

Will and Bo: CHEERS!

[Will and Bo leave.]