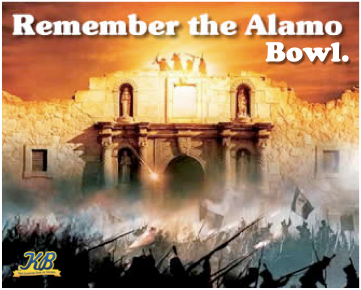 It will be hard for Texas Tech Head Coach Mike Leach to remember the Alamo (Bowl) this year.
Why?

Because he has been suspended from coaching in it.

As many of you have heard by now, Mike Leach totally got Mangino-ed by one of his players. Adam James, a redshirt sophomore wide receiver, came forward stating that he was mistreated after an injury.
So basically, Mike Leach is getting suspended for adding insult to injury. 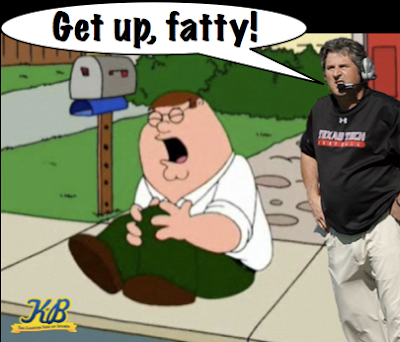 I mean, what’s next?! A coach getting fired because he weighs too much?!
Oh wait… Oops. Sorry. I forgot.
To make a long story short, James, who is the son of ESPN College Football Analyst Craig James, got a concussion in practice on December 16th. The next day, he was instructed not to practice because of the concussion and an elevated heart rate. So Leach did what any regular collegiate head coach would do and get him to rub some dirt on it, walk it off, and make him sit in a dark empty electrical closet for three hours.
Which seems completely logical.

I mean, the kid had a concussion. What do you do when someone’s brain slams into their skull hard enough to concuss them? You move them “to the darkest place, to clean out the equipment and to make sure that he could not sit or lean.” Yes, that’s an actual quote from a source close to the James family. That same source said that two days later, Leach said to “put [James] in the darkest, tightest spot. It was in an electrical closet, again, with a guard posted outside.”

However, if you think Mike Leach is just going to take this suspension lying down, then you’re wrong. The James family went barking up the wrong Crabtree, because Leach is going to fight this.

His lawyer has already come forward with a rebuttal saying James “was placed in an equipment room as it was much cooler and darker” than the practice field “after a doctor had examined him and returned him to the field.” His lawyer also said that a trainer was posted outside the door and that James was given ice in the one to two hours in which he was secluded.

Who does Mike Leach and his lawyer think they are? Happy Gilmore?

Virginia Venit:
What’s this I hear about you breaking a rake and throwing it in the woods?

Happy Gilmore:
Whaaaat?! I didn’t break it. I was just testing it’s durability. And then I placed it in the woods because it’s made of wood and I just thought he should be with its family.

Only Leach’s movie script goes a little more like this:
James Family:
What’s this we hear about you throwing our concussed son in an electrical closet for three hours and putting a guard outside so he wouldn’t escape?

Mike Leach via his Lawyer:
Whaaaat?! He didn’t throw him in there for three hours. He placed him in the electrical closet for one to two hours and placed a trainer outside for convenience. Adam James is such an electic athlete that Mike felt he would feel more at home in an electric closet.

Do we think Mike Leach will be fired? No. Or at least he shouldn’t. I mean Mike Leach has done incredible things. For one, he has put Lubbock, Texas on the map. I don’t know if any of you have been to Lubbock’s website, but that is saying a lot!

So what if he put some half brain dead kid in a closet for a few hours? The kid was probably destined to ride the bench just like his old man anyway. Heck, at lease he didn’t break countless NCAA secondary recruiting violations. Or at least he didn’t tell his players to go play intermurals brother! Or at least he didn’t choke one of his players. Or at least he didn’t manipulate his players into taking cortisone shots in their injured knees only to have their knees give out on a sack and after being rushed to the hospital telling the doctor you knew nothing about the knee problems and eventually later on in the season when the team rebeled against him he freaks out and tackles the wide receiver in the locker room only to stand up embarrassed and walk out, never to be heard of again. Ya know, at least he didn’t do that.

Not to mention, Leach just signed a five-year, $12.7 million deal in February keeping him at Tech until 2013. That contract includes incentives of a $250,000 bonus if Leach and Tech win the national championship, a $75,000 bonus if Tech participates in a BCS Bowl, a $50,000 bonus if Leach is picked as national coach of the year, and an extra $15 if he can actually get one of his players to sit in a dark closet for over 2 hours.

And if not, at least the state’s monthly magazine obviously likes Leach.

And if not, at least these ladies obviously like Leach.

Although, only time will tell. Or maybe ironically Adam’s father, Craig, will tell, when the news breaks, what Texas Tech is going to do with head coach Vince Gill. But until that time comes, go concuss yourself and sit in an electrical closet.