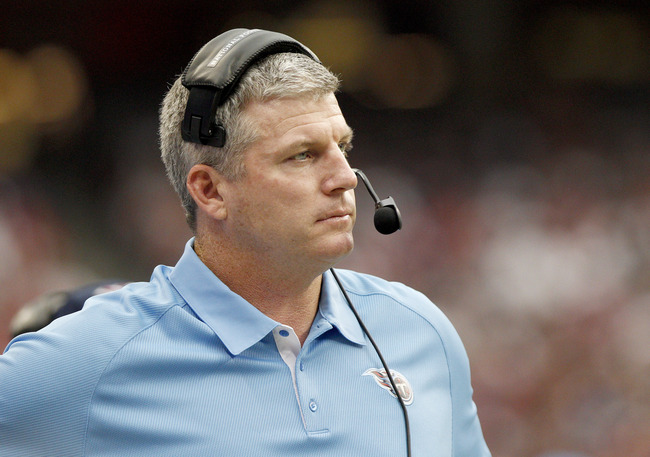 7:13am – Mike wakes up to his wife giving him a delicious breakfast in bed. Mike says thank you, without smiling or frowning. He’s not incredibly hungry, but considering it’s not late in a game, he doesn’t pass.

7:34am – Mike finishes the breakfast, only to be surprised by his wife handing him a cupcake with a candle on it. Mike blows it out successfully, because to Mike, a candle is like an opportunity. He’s good at blowing it.

7:52am – Mike grabs his trusty bottle of Just For Men: Touch of Grey… He pours the whole bottle on his head. Gives himself a wink in the mirror, still showing no emotion.

7:56am – Mike takes one last look in his chest-up mirror, and lets out a sigh. Mike is the kind of guy who sighs a lot.

8:27am – Mike parks his 2003 Ford Taurus in his usual reserved spot. However, according to the sign, the spot is still reserved for “Head Coach Jeff Fisher” – The Titans keep saying they’re getting around to changing that.

8:29am – After 2 minutes of staring off in to the distance, Mike gets out of his car and sighs.

8:31am – Mike walks into his office, only to be greeted by his assistant, Melinda, and a balloon that says, “Happy Birthday! Party Time!” Mike shows no emotion and thanks Melinda for the thoughtful gesture.

8:45am – After a near-15-minute conversation with Melinda about her son and how he wants to quit his high school’s band, Mike settles at his desk.

8:53am – First game of Minesweeper is complete.

9:01am – Mike realizes this is a recorded phone call as soon as the recording of Bud Adams singing Happy Birthday To You cuts to a female voice saying, “Head Coach Mike Munchak.” Mike sighs. Immediately hangs up the phone.

9:37am – Mike realizes this is NOT a recorded phone call as soon as Bud asks him if he’s seen his socks. Mike says no. He then hangs up the phone.

9:52am – Mike sighs, only because it’s been a while since his last sigh.

10:30am – Mike is called into a meeting. The meeting is to discuss next year’s fan appreciation give-aways.

10:35am – Meeting is adjourned as they all just decide to give away the same goods as last year, and the year before that, and the ten years before that. A magnet schedule, a poster of the team, a sleeve of Titans team trading cards presented by Kroger (featuring two cards of the loveable T-Rac), and a re-usable Titans shopping bag.

2:45pm – Mike takes a look at the 50 best free agents who will be made available next week. It’s not information provided by the league, but instead just a slideshow on BleacherReport.com.

3:02pm – Mike gets a knock on his office door. It’s Steve from HR. He has a card signed by 2/3rds of the office for his birthday. It’s clear they forgot in the morning, and overheard Melinda. So at lunch they ran and got a card. Mike thanks them, again showing no emotion.

3:30pm – Mike begins his film session. However, instead of watching film from last season, Mike watches film from other coaches on how to run drills. This particular video is found on YouTube with coach Kige Ramsey.

4:06pm – Mike gets a call from Bud Adams. Bud still wants to know if Mike has seen his socks.

4:40pm – Mike is asked to join everyone from the office in the break room. They present him with a birthday gift. It’s a “new” headset. Mike thanks everyone for the thoughtful gesture, showing no emotion. Returns to his office.

4:56pm – Mike receives a company-wide email from offensive line coach Bruce Matthews asking if anyone has seen his headset.

5:07pm – Mike grabs his coat, prepares to leave for the day, and sighs.

5:15pm – Mike runs into Chris Johnson in the hall. Literally. Chris falls down.

5:20pm – Mike starts his car after looking off into the distance for 2 minutes.

7:13pm – Mike settles in on the sofa to watch Pretty Little Liars with his daughter who is currently living at home to save money on rent. Mike is intrigued. Just kidding. No one can tell how Mike feels about this episode because he shows no emotion.

9:04pm – Mike grabs a late night snack: a bowl of Kellogg’s Corn Flakes, with skim milk, and a glass of water.

9:28pm – Mike kisses his wife and settles into bed. It’s been a mediocre day for Mike. Or then again, it’s been like any other day for Mike.

9:29pm – Mike does this sort of half-smile, half-frown look as he begins to dream about nothing exciting.