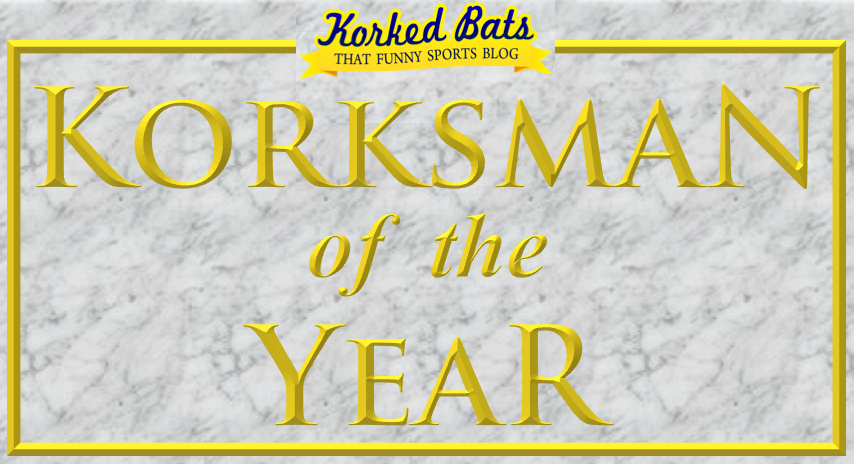 Ok, I’m sorry. I didn’t mean that. I just get a little defensive when people start to question the integrity of this award that we work year round for. We come up with a number of nominees and for the second straight year, we gave you the opportunity to vote for the Korksman of the Year.

The lyrics to the wonderful holiday classic “Santa Claus Is Coming To Town” could also be used to describe this year’s Korksman of the Year.

He sees you when you’re sleeping.

He knows when you’re awake.

He knows when you’ve been bad or good

Because he attends every game in person.

The 2014 Korksman of the Year is Marlins Man. 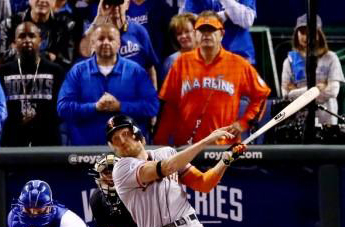 2014 was the year of the impossible happening. Charles Manson got engaged. LeBron James willing decided to return to Cleveland. The Tampa Bay Buccaneers won a football game. And a man wearing a Marlins jersey made it to the postseason.

Marlins Man was the infamous man who conveniently sat behind home plate of every World Series game and pretty much every other sporting event in 2014 too. Marlins Man was like the ALS Ice Bucket Challenge of sports this year. You saw him everywhere, and he was just trying to raise awareness for an incredibly rare and incurable disease… being a Marlins fan.

Many believe there are at least a dozen Marlins in the world, and we were able to find one at every World Series game this year. That’s like finding a unicorn, or a humble Patriots fan. Marlins Man blew up in popularity for just paying an uncomfortable amount of money for prime seating at sporting events… Even the Kardashians are jealous of how famous he got for doing nothing.

So you know just how Marlins Man came to be, let’s first give a little background on him. Marlins Man was born and raised in the small town of Ashton, Alabama. As a young boy, Marlins Man was confined to his bed for 3 years because his body grew too fast. He later became an extraordinary athlete and decided to one day leave the small town of Ashton and head out into the world. The town threw a parade for him as he left, where an old witch pulled him aside and gave him advice. The advice she gave was… wait… nevermind. This is the plot of the Tim Burton movie Big Fish.

The real background of Marlins Man remains a mystery. Like how did he make all his money to spend on expensive sporting event tickets? Or why does he occasionally turn his Marlins visor to the side during some half innings? Or why the heck would anyone willingly be a Marlins fan? Is he currently standing behind me? There are some things we will all go to our grave not knowing. Add the answers to these questions to that list.

However, one thing remains true about Marlins Man… He’ll always be in our hearts.

No seriously, he somehow found tickets to our hearts on StubHub.

Check out Marlins Man At 13 Other Major Events here

Previous Korksman of the Year Winners