Skip to content
Nothing to do with sports
September 9, 2009 Austin

It’s German for no.

It’s the right fielder in baseball.

Upside down it’s a six.

When you’re happy, you’re on cloud 9.

Add an -ers on the end and it’s a football team from San Fransisco. 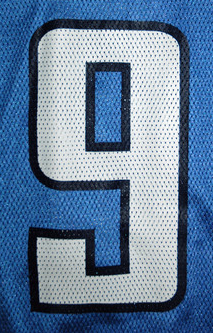 It’s the decal the Titans are wearing this year. (R.I.P. Steve)

Throw a Tech in the front and it’s rapper from Kansas City.

If we’re talking about the number of inches in your nails, then it’s a rock band.

How about the number of planets? (I refuse to let you go, Pluto!)

The side of a Rubik’s Cube has how many squares?

The Beatles have song, Revolution 9.

Manny is just bein’ Manny with two 9’s on his uni. (4 if you wanna get technical.)

Bobby Hull and Gordy Howe both wore #9 in hockey.

Around nine people care about hockey.

September is the 9th month.

Tuesday is the 9th day of the week.

The Beatles Rock Band comes out today, the 9th.

Jared and I give the movie Titanic nine stars… Out of four.

Nine West is a shoes, handbags, and apparel store for women.

Channel 9 was our public access channel in high school. What’s up WBHS?!

IX is the Roman numeral for nine.

9 is the Amurikan numeral for nine.

You can’t spell Nintendo with out Nine… kinda.

The number of innings in a non-tied baseball game.

District 9 is a movie I haven’t seen yet but am planning on seeing.

New Hampshire is the ninth state.

Bethoven’s Ninth Symphony is the theme song behind those old Starz! commercials.

Although it’s a new decade. One of my favorite sayings is still, “Come on man, it’s the 90s!”