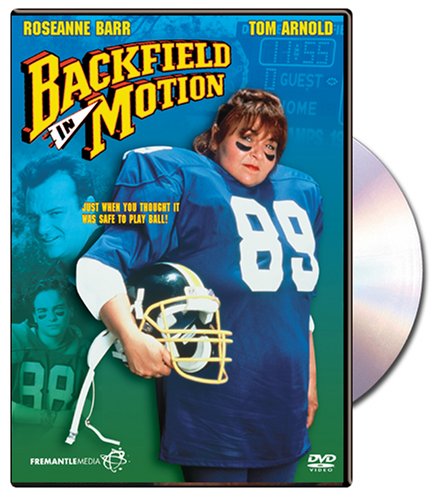 Now, I’m not worried that anyone reading this somehow found a way to include Roseanne in their starting lineup this week. To be honest with you, if you are able to pull off that feat then you are forever a legend in my book. The real reason I chose her for this week’s post is to bring it to your attention that a football movie exists starring Tom Arnold & Roseanne. Did I miss something growing up? How have I never heard of this movie and why isn’t it talked about more to this day as the worst idea for a film ever?
I became quickly intrigued and tried to find any and all information I could about this golden discovery. Yes, it was as difficult as it sounds. I couldn’t even get a plot summary from IMDB. I did however find movie posters for the film in which this one was named after. That was their first mistake. Their second and third mistakes were casting not only drug and alcohol addict, Tom Arnold, but also his obnoxious wife Roseanne as well.
Could this movie get any cooler?
The answer is yes. But it seems making the worst movie in the history of the world was the goal of all involved with creating this epic failure. Here’s a summary i was able to find courtesy of allmovie.com:
Roseanne plays a widowed real-estate agent who lives with her teenaged son Johnny Galecki. Mother and son have moved to an upstate California town where high school football-and male chauvinism–reigns supreme. When Galecki joins the junior-varsity team, Roseanne, appalled by the subservient behavior of the town wives, organizes a “mothers vs. sons” football game. Tom Arnold costars as the school’s vice-principal, who puts his standing in town on the line when he falls in love with Roseanne.
I’m sorry. I know that was painful to read. And the thought of Roseanne being the romantic love interest in any film is beyond me. But I guess I can see where Tom is coming from. Nothing quite gets me like a supersized woman in pads.
If anyone has seen this movie please let me know what you thought of it in the comments section. I would recommend leaving your name anonymous though, because that’s probably pretty embarrassing for you.