I’m going to be honest. I spend a unnecessary amount of time tweaking my fantasy football team each year in hopes to take home the big prize at the end of the season only to see my boys slip into the depths of mediocrity about 12 weeks in.

I always think I have a great team only to find out I have assembled a roster strikingly similar to the list of players who have underperformed all season. You know, busts.

I don’t know if it’s my management, coaching, team chemistry, or simply fate that I do a poor job assembling a decent team, but if it has taught me anything it is that I am probably not the first person you would want to seek out for tips on who to start week to week in your respected leagues.

So this year I am going to take a different approach. Maybe I should focus on who NOT to start as opposed to who should start.

So here it is, my advice for…

DO NOT start Donte Stallworth. Reason being, he went to the University of Tennessee (crap, so do I).

Let me try this again. Don’t start Donte Stallworth because he was a past member of the University of Tennessee football team where he was coached by a human sized highway construction barrel. That’s already bad enough. And please don’t ask me why I don’t go to Kentucky still if I hate the Vols so much. Unlike I guess most of the people who ask me that question, I was actually a huge sports fan before I entered college. I know this is a crazy concept but hear me out. Just because I attend college at a school I grew up hating, I am not just going to start liking them now.

So yeah, I hate the Vols, always have and always will. Big whoop.
(A.D.D. thought that popped into my head while writing this post: Is it possible that the Vols had the highest combined weight of the basketball and football coaches last season? There’s a chance, but the more i think of it the more I realize Bill Self would have to weigh negative 37lbs. for Kansas to not take home that award.) 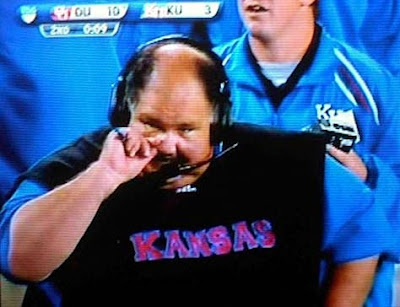 Sorry, I think I got a little off topic there. And sorry you had to look at those two coaches. Back to the issue at hand. Of course, the real reason you shouldn’t start Stallworth is because he is is suspended for the season for DUI manslaughter.

Hold up, suspended for the season? That’s it? He drunkenly struck and killed a man and his penalty from the NFL is that he can’t play this year?

Hmmm, last time I checked Michael Vick was sentenced to nearly 14 dog years (too soon?) or 23 months in prison for his involvement in a dog fighting ring. In addition, Plaxico Burress is set to begin his 2 year jail sentence soon for pulling a Cheddar from 8 Mile and shooting himself in the leg.

See, he’s an animal lover after all!

So I guess this is fair:

So yeah, don’t start Stallworth this week or any week this season. But next season, by all means.