Today my twitter was blowing up about people and their planking.

Last time I checked, the plank is not something to take lightly.  Now, if I was a girl like Erin Andrews, I wouldn’t know anything about the plank problem, but I’m a well informed lady. Let me paint a picture for you, if you are unaware of what to look out for.

If you were, say, on a ship. And just for fun, let’s say you were on a ship because you had been captured by a group of pirates who really didn’t like your newest friends and thought that they could potentially use you and your little brothers for bait.  Maybe the Captain was born with the traditional two hands, but lost his other hand in a fight with a crocodile that somehow swallowed a clock so that it’s sneakiness factor is at an all time crocodile low.  Now imagine that the captain of this boat that now only has one hand due to an unlucky fight with a crocodile, decides to increase his street cred by not choosing a prosthetic hand to fill in his new gaps, but instead a metal hook. 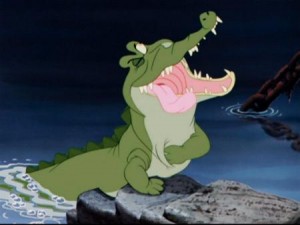 Then that Captain insists that his crew and his arch rival refer to him by his new appendage, Metal Hook. Hook, for short. Now since this rude Captain is holding you and your brothers as bait for this rival character, you have only one way off of this boat. The Plank. This is where many have gone before you. Murderers, Traders, and now you.  Just because you befriended the only character in the story to not have a boat of his own and with a mischievous streak. Now when the Captain starts tying you up, it is save to say that you are about to be taking a walk down this much talked about plank.  This is not a fun way to die.  This is public humiliation right before you jump into shark and crocodile infested waters ultimately leading you to your immanent death. The best way to survive the plank, is to have a friend that can fly.  I know it sounds crazy, but it’s either that or just a really sneaky friend with a submarine, but submarines are expensive.

They have taken this plank idea into some restaurants as well.  Please don’t be as afraid of these.  Usually when they put a plank in a restaurant they will just substitute a ball pit for where the shark infested waters would be on a serious pirate ship.  I don’t think it’s a smart idea to make light of such a serious issue, but it’s just about business for some people.

Please understand the seriousness of the plank.  Don’t take your family for granted.  Don’t wish you were in Never Never Land.  Never go with a young man who wears green tights even if he promises that you will be able to fly.  Stay with your brothers, even if that means you have to grow up.  Growing up isn’t that bad.  You get to buy whatever cereal you want and you get to stay up as late as you want.  It’s awesome.

And that’s what planking is.