Skip to content
NFL
July 18, 2009 Guest
“There’s a lot of things they don’t want me to do. I do it anyway. They know that. I don’t know why they even fussing about it. When I say I’m going to do something, I’m going to do it, regardless of what they say.” 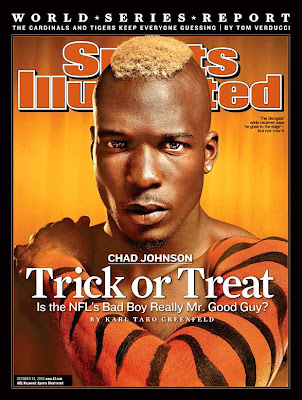 He obviously isn’t happy with Commissioner Roger Goodell and his decision to shut the tweet up and play ball. The NFL in accordance to Roger’s newly planted “No In-Game Twittering” rule, has outlawed the art of an in-game tweet and has left players like #85 wondering what the twit to do.

With Mr. No Fun in office, we aren’t surprised that the decades most innovative way to celebrate a good half of football, has been shacked. Then again, any form of celebration has been outlawed in the NFL. Just add this to the already long list of “fun” that the NFL has taken away for the upcoming season.

This act poses a question that Korked Bats is having trouble answering.

Does this mean Shaq can’t twitter at halftime? Does this mean Bobby Cox can’t tweet after a complete game shutout by Tommy Hanson? Does this mean that Lisa Leslie can’t… Wait… is the WNBA still around? They are? Well, they’d probably kill for some press. You’re welcome for the free pub, WNBA. (No, not that kind of pub, Taurasi!)

Sadly, this outcast by Rog has gotten rid of many incredible tweets among the NFL. Check out these few tweets from NFL players who can obviously create a well thought out sentence or two.

(WARNING: All English and Grammar teachers out there, the text you are about to read may cause abrupt chest pains whether you have a heart condition or not. The following content is very shocking. 140 characters or not, this is just horrid spelling and grammar. Please read at your own risk.)

For more NFL Player Tweets, click here.
Roger Goodell is also looking into banning these things for the 2009-2010 season: