With today being the 40th Annual running of the New York City Marathon I thought that today would be the perfect day to pay tribute to one of the most under appreciated specimens in sports. No, I’m not talking about flip sunglasses made popular by baseball players and Kadeem Hardison. 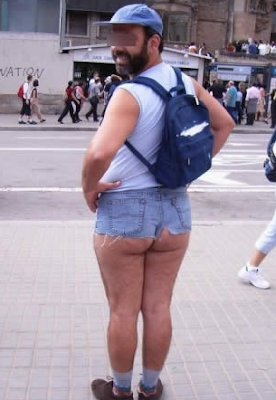 Short shorts are the most over-ridiculed and least appreciated piece of any uniform in sports.

When you think about it, short shorts have had a major impact on every major sport and even the not so major ones.

I want to start with maybe one of the most famous athletes ever known to dawn the leg revealing wonders, John Stockton. Not only is Johnny a great candidate to sport the shorts, but he also holds the NBA records for career assists and steals. All of which was done with a 3-inch inseam.

Even Chris Cooley, the Washington Redskins tight end, sported the short shorts at mini-camp this summer to really show off his, well, tight end.

Baseball isn’t even immune to the short shorts infection. Take the 1976 Chicago White Sox for example. They decided to wear los pantalones cortos for the season and only finished 6th in the American League West.

Sadly, they realized how dumb they looked and went back to pants the next season.

And then there’s Richard Simmons.

Need I say more?
Rugby Players play one of the toughest sports in the world… in short shorts. I mean seriously, ears are ripped off, bones are broken, acidental wedgies are given, and the only thing on their mind is, “When will they be able to get back in?” Think football, but as one continuous play without pads and each player runs as much as a professional soccer player. If you still think guys in short shorts aren’t intimidating, then watch this.

You can’t forget about the Kenyans.

But short shorts aren’t the only species of clothing that get flack.

There is also spandex.

Now, I want to say, as a runner, spandex is one of the most comfortable things in the world. If it was socially acceptable for men to wear only spandex as everyday clothing, I would. But for some reason only girls in UGG boots are allowed.

Wrestlers are made fun of all the time. “Haha! You wear tight clothes and roll around with other men!” Ya it’s easy to make fun of wrestling if you’re not involved. How would you feel if this guy was trying to pin you?

Spandex is also a popular choice for track and field athletes. You can make fun of these guys all you want but I have two words for you… Usain Bolt.

Now I might have left something out and if I did I apologize. But remember, Meb Keflezighi won the Men’s New York Marathon today running it in 2 hours 9 minutes and 15 seconds. That means he averaged a 4 minute 56 second mile for 26.2 miles.

The moral of this post is, the next time you feel like making fun of a short shorter ask yourself,
“Could I do that for even 1 mile?”
If you would like to write a post and be a guest contributor to our site, write an e-mail to us with your topic and proposal at: korkedbats@gmail.com