Damn, this one sucks. I think mainly because it came so unexpectantly. But Mike Leach, former Texas Tech and Washington State and now current Mississippi State head coach, has passed away at the age of 61. This dude was a college football gem. As a fan of team content, Mike Leach always delivered. Just stick a microphone in his face and he would spit out absolute comedy gold. Like Will Ferrell circa 2005 to 2011-ish. So in honor of the Pirate, I wanted to share my favorite moments from his days.

“So I’m sitting back there, and so I jump in the pool to kind of cool off, because it was cool to talk on the radio outside. And then I was also getting Fed Ex’s every week, to prep me for the game I was broadcasting. So I get in the pool, and I get out and I’ve got my board shorts on, so then pretty soon every time I get out of the pool I’m sitting on the lawn chair and I got these wet board shorts on so it’s like sitting in a diaper the whole time, you know. So you know nobody is around, fence around, so I think ‘What the heck, I’m taking these things off.’ And so I don’t have anything on, and I get up and I pace, I’m a pacer, I’m pacing right now. And then talking with my hands on air making just really profound points on radio, and I’m very proud of all the brilliant things I’m saying. And then I don’t have a stitch on, and through the gate here comes the Fed Ex guy, here comes the Fed Ex guy watching me pace around naked, talking on the radio about football and all this, and he’s like ‘What the hell?’ and then he hands me the FedEx, and of course I can’t break the conversation I have to keep talking. And the funny thing was, I’ve seen him every week, he never said anything, it was like ‘oh well another day.’ But yep, sure enough.”

And then there were the quotes…

Who Would Win In A Fight Against Pac-12 Mascots?

Coach Eric Taylor’s success can and should be credited back to Mike Leach. pic.twitter.com/tt7PyozbtC

Oh yeah, and that time he stuffed Craig James’ kid in a shed. Classic! Rest easy, Mike Leach. You will be sorely missed. 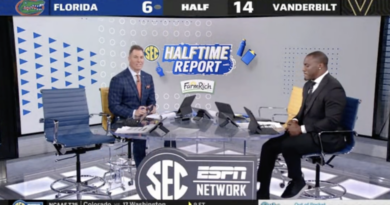 Note To Self (And Peter Burns): Don’t Ever Say Anything About SEC Network Analyst Benjamin Watson’s Wife