For years, the NBA Champs have been led by their Black Mamba, Kobe Bryant. بيت٣٦٥ Kobe got the nickname Black Mamba for his ability to strike at any moment, as well as for having a shot as lethal as venom. Also his love of a roller coaster at Worlds Of Fun in Kansas City. As the 2010-2011 NBA Season trudges through the midway point, their struggles have come to fruition, and Kobe thinks he knows a possible solution:

“When I’m out there being aggressive and doing my thing, he [Pau Gasol, Lakers Forward/Center/Andrew Bynum knee replacement] needs to follow suit and just be just as aggressive which is hard for him because it’s kind of against his nature. But I think tonight was a good step,” Bryant said.

“Even when he was in Memphis and he was the go-to guy, he was always very nice. Very white swan. I need him to be black swan.” 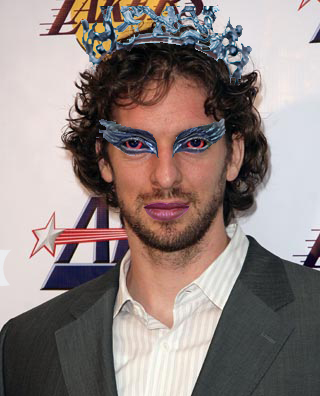 So the Black Mamba wants a Black Swan, and this makes sense. Gasol always reminded me of Natalie Portman. He is from Europe, Portman was in V for Vendetta. Both seem to be reckless with their hair. قوانين لعبة القمار Gasol looks like a photoshopped combination of Portman and Garden State co-star Zach Braff (with an emphasis on Braff’s nose). It just makes sense.

And I think Kobe is on to something. Gasol is like a swan: he has an odd face and interesting neck. لعبة جاك Now if only every other Laker could be a Black Animal. I have some theories:

Andrew Bynum: The Black Deer. Deer are elegant animals, often thought to have great leaping abilities and are very athletic, but more often than not you see them lying on the side of the road doing nothing.

Ron Artest: The Black Polar Bear. When provoked, Ron Artest has been known to leave the cage (floor) and attack innocent people (wrong people). See, this video (Disclaimer: This video is nuts):

Also, everyone knows Artest’s other nickname is Binky

Lamar Odom: The Black Muskrat. Male muskrats are notorious for mating with questionable looking female muskrats just to garner attention. Look it up.

Luke Walton: The Black Pheasant. Ask anyone if they like a pheasant and they’ll respond: “Um, they’re ok, I guess. I forget about them sometimes, but they’re ok. They’re dad was way better.”

Devin Ebanks: The Black Hoatzin. Yeah, you don’t know what a Hoatzin or a Devin Ebanks is.