It’s been a while since my last Huffington Roast and I apologize. But what are we waiting for? Let’s get to it!
• • • 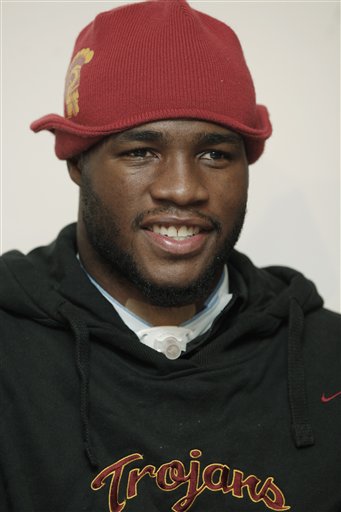 USC running back Stafon Johnson has accepted an invitation to play in the Senior Bowl. This invite came less than 4 months after a weightlifting accident hospitalized Johnson, ending his season. The accident required over seven hours of surgery. Johnson dropped a dumbbell on his neck tearing his right vocal cord away from its mooring and crushing his larynx. This left him unable to speak and swallow or eat solid foods. However, he has since regained both abilities.

I’m sure it’s safe to say that Stafon is ready to run the ball down the opposing team’s throat in the Senior Bowl.
• • •

The Washington Redskins fired head coach Jim Zorn yesterday after the team finished last in the NFC East (for the second straight year) with a 4-12 record. Zorn was 12-20 in his two years as head coach. I’m not saying that Zorn wasn’t a bad coach, because he was. Let’s face it, Jim Zorn is to coaching as Roseanne Barr is to sexy voices. But was this the right move for the Redskins? I don’t think the head coach is the problem. Heck, the franchise has gone through head coaches as frequently as Elizabeth Taylor has gone through husbands. I think the biggest problem with the franchise is in their front office.

In his 11 seasons as the owner of the team, the Redskins have been 80-96 with six different head coaches, they went to the playoffs three times and have only had one divisional title. It doesn’t take a genius to figure this out. Take a look at Oakland. Or how about Dallas? They haven’t won a playoff game since Dean Cain was relevant in pop culture. You think it’s because of their lack of talent? No. It’s their “over-powering, have too much control, money is the answer” owners.

So listen up D.C., you may want to reconsider your owner before you go firing another head coach. The only thing good Dan Snyder has produced in the past 11 years was pretzels…

The Buffalo Bills laid off their entire coaching staff yesterday. The ENTIRE staff. They didn’t miss anyone when they went around firing people. But like the Washington Redskins, I think the Bills fired the wrong people. Instead of firing the coaching staff, I feel like Buffalo should have fired their fashion consultant. Good gracious, those uniforms are hideous! Hideous enough to be the uniforms of a team from the movie Any Given Sunday. Somewhere, Jim Kelly is turning over in his grave. You are probably thinking, “But Jim Kelly isn’t even dead yet.” Actually, he killed himself a few years ago after they unveiled these uniforms.

Everyone knows if you look good, you’ll feel good, and then you’ll play good. Which is probably why the Bills have been so bad. They are worst dressed than Renee Zellweger at the Golden Globes (fashion joke).

Before you read this, know that I have been a fan of both TCU and Boise State. I have been pulling for them all season and was extremely excited to watch this game. But, come on. Last night’s game was more boring than a toll booth employee. There was less scoring than a game of Scrabble between dyslexic kids. And to cap it all off, there was no proposal at the end.
Not to mention, FOX’s coverage was hiddeous.

Just because this is one of the only college games you guys cover, doesn’t mean it’s the one of the only college games we watch. We know both schools are ranked. We know Boise State was in the 2007 Fiesta Bowl. We know Kellen Moore is the highest rated QB in the country. And we know TCU’s Andy Dalton is a ginger. And yes, we know both school’s have incredible defense, but there were more dropped balls than Sprint has dropped calls. And for the love of St. Pete, quit cutting to the same shots of each’s schools’ band and fans. (But you can continue to cut away to shots of TCU’s dancers. Fine by me.)
• • •
Speaking of annoying things in bowl coverage…

I swear, if I hear that “I Am The Champion” song from ESPN’s Bowl Week coverage, I’m going to… to… ummm… to think of something funny that I will do later! But ESPN, for real, that song is getting really old!

University of Kentucky head coach Rich Brooks retired yesterday. He was 39-47 with Kentucky. However, the Wildcats will not have to go on a search for a new head coach as they have already gone the route of Florida State and named a coach-in-waiting. Kentucky’s new head coach will be their offensive coordinator, Joker Phillips. Wildcat fans are now hoping that Phillips’ career will bode better than the previous Joker…