For those of you who have never heard Trick Daddy explain why he is a thug, this post will help give you a better understanding of what a “thug” is. And no, I don’t mean a member of the Indian Cult Thuggee. I mean this kind of thug.

Before we begin, we should find ourselves an example. Someone who can demonstrate the art of being a thug. Not like, “Justin Bobby from The Hills” thug. More like “Those Two Guys That Tom Cruise Caps In Collateral” thugs.

Hmmmm… Who can we choose? 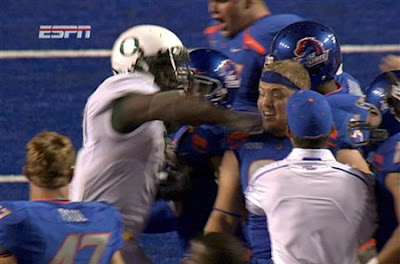 Oh, I know. How about LeGarrette Blount?

The only problem is he doesn’t look like a thug. 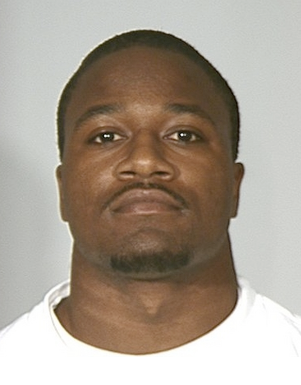 Oh no wait… Yes, he does.
(Only difference is Blount punches the opposing team’s players, not strippers.)

Ok, let’s move beyond his looks. How about his name?

His name is LeGarrette Blount. It’s like Garrett, only with a ‘Le’ in front. Which is actually quite significant.

If you want to find out your thug name, take your name now (i.e. Dave, John, Dan) and put ‘Le’ in front of it. (i.e. LeDave, LeJohn, LeDan) Instant thug status.

However, his first name isn’t the only thing that makes him thuggish. His last name puts the icing on the cake.

His last name is Blount.
So?
It’s pronounced Blunt.

The only name more thuggish than that is Thuggy McThugerson.

Of course, with a name like Blount, don’t you think he would have been more chill following the game last Thursday night?

Or maybe his excuse is that he just had the munchies.
That’s why he almost went into the stands toward those fans.
“Gimme those nachos! I’ma eat yo nachos!”

Obviously, Blount’s college career is over. Some are saying that he knocked out his chances for the NFL too (pun intended). But don’t hang your head LeGarrette. There is always The Ultimate Fighter!

Not to mention, LeGarrette Blount had more yards rushing before the season started than he did after the Boise State game:

One thought on “The Definition of Thug”