Skip to content
College Basketball
March 31, 2009 Austin
Whenever I am offered an 8 year, $35 million dollar contract I always like to sleep on it and then hit up my favorite doughnut shop the next morning to think about it.

Coincidentally, so does John Calipari!

Tuesday, John Calipari inked up a contract that made him the highest paid coach in college basketball.
Welcome to Kentucky
13 Final Four Appearances
100-45 NCAA Tournament Record
7 National Titles (Second only to UCLA)

Think You’re Up For It, Cal?

Calipari, a year from leading the Memphis Tigers to the national title game, is now taking the reigns of the winningest college basketball program of all time. Only, the Wildcats haven’t gotten the wiff of a Final Four game in over a decade.

The Wildcats are coming off a season in which they only had 22 wins. That may seem like a lot to the average college basketball team, but does 22 million dollars seem like a lot of money to Bill Gates?

This past season, the Cats failed to make it to the NCAA Tournament under coach Billy Gillispie for the first time since 1991. The Cats then went on to lose to Notre Dame in the NIT Quarterfinals.

Billy Gillispie proved to be as good of a fit at Kentucky as the Green Lantern at a Superhero Convention. Sure he seems like he will be able to save your program, but after a while you realize that his super powers are worthless! 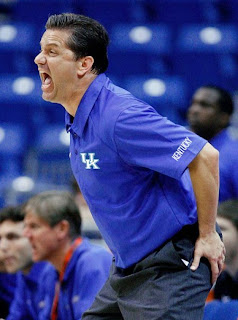 In this photo: Calipari is yelling, “My ass is killing me from my new HUGE wallet!”

So congratulations John Calipari on your new job. Enjoy your doughnut, but when you wake up tomorrow, you have as much work to do for Kentucky Basketball as Barack Obama has to do for our economy. Best of luck…

But like another Cal I know, this Cal makes his own luck.

One thought on “The $35 Million Dollar Man”