As I mentioned before, I hate the way the sports media tries to evaluate drafts in the moment. I feel it is a crap shoot to know who won and who lost in the drafts. If anything, we should evaluate the drafts of about 5 years ago. Then we can really see which teams have drafted well and which teams have not. Glen was the man who really encouraged me to do it, and so I am (and just for the sake of the record, I am posting this right now on my time).

I will try to back up what I am saying statistically, but I do have personal feelings on guys, and must point out that these are merely my uninformed opinions. I am drafting based completely on value, not team need. It would be too much work to see where teams had need at the time and try and get in their head of which player is the best fit. Rather, I am just ranking the players and then assigning them teams.

The big challenge also is guys are still breaking on to the scene from this draft so we really can’t even get a proper evaluation yet. Take a guy like Nate McClouth for example. He just broke on to the scene this year. He would have not made the list of notable players if I did this last year. Now he is a first rounder in the re-draft. Just some food for thought on how crazy it is in baseball and the way guys develop. I also reserve the right to miss guys seeing as I can’t promise that someone did not slip through my radar. Ok, without any more delays…

1. With the first pick, the Marlins select… Chase Utley. (1st Round, 15th Overall)

This is a no brainer. Right now he is carrying the first place Phillies and having an MVP year. He plays a position that usually is not associated with 30 HR power. He has had some injury problems, but still this is not even a contest. He is a career .300 hitter, who averages 13 steals, 112 RBI’s, and has a good glove (.98 field percent) over the course of his career.

2. With the second pick, the Twins select… Brandon Webb. (8th Round, 249th Overall)
Okay, so it was not a ‘no-brainer’ after all up top. A bon-a-fide ace, leading the ML in wins this year, career 3.21 era, and average 180 strike outs to 74 walks over his career. SICK. The Marlins may still kick themselves for not going after the lock down ace.

3. With the third pick, the Cubs select… Grady Seizmore. (3rd Round, 75th Overall)

The five tool centerfielder is a cornerstone player. He averages a 25 homerun/25 steal season, plays great D, is a solid character, and a phenomenal hitter. He is a great snag at number 3.

This may be a reach, but there is just so much value in a guy who has ace potential. He has been awesome this year but really came of nowhere until now. The AL all-star starter is a strike out machine who is a dominator.

If he could stay healthy he could be the first pick. This guy is a legit ace. It will be fun to see what he does with the Cubs this year. He has already looked pretty stinking good.

6. The Rays are up and they select… Adrian Gonzalez (1st Round, 1st Overall)

The 6′ 2″ power lefty is the best power hitter in the draft. He could lead the league in home runs someday. I may have him too low, but get off my back, this is hard. He already has 25 homers this year and hit 30 last year. He has a solid career average of .280 too. What is really crazy is how the Marlins trade him to the Rangers for Ugeth Urbina who then traded him, Chris Young, and a crappy prospect to San Diego for Adam Eaton and Akinori Otsuka. A lot of teams are kicking themselves right now.

He could be an ace if he could stay healthy. I take him over James Shields because he can strike people out. His career numbers are great; he just has to stay healthy. Also, I could not pass up seeing him go to a divisional rival of the Cards. I would love to see Wainwright work ’em over.

I like Shields. He has been the second guy behind Kazmir for too long. I think he is a stud in the making. A solid number 2 pitcher, not quite an ace. He has almost 4 times as many strike outs to walks over his career, and 2 of 3 years have had a sub 4.00 era. I like him a lot. 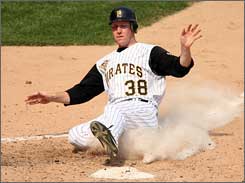 If your name is Bay, you must play near a Bay. It makes so much more sense than the 3 river area. The former Rookie of the Year averages a .282 average, 32 long balls, and 102 RBI’s. Solid club house guy, he is a great fit and a very good player.

A very solid closer for the White Sox, Anaheim always hoards good bull pen pitching. Why not. Maybe the move him to the rotation for a while before they realize the bull pen guy he is capable of. He has two 40 save seasons and a career era of 3.02.

This was hard for me. There a lot of good outfielders available (which you will see in the next couple of picks), but I like his upside. He is an on-base monster who has great power potential. I wish he had not gotten hurt this year so we could have gotten a better look at him, but I think he could develop into a real gem.

I have no idea what this guys deal is. He came out of no where. He is having a break out year where he made it to the all-star game. I thought he would cool off (which is why I dropped him on my fantasy team… doh!) but dude has 22 long balls and 13 steals and a .281 average. That’s just too good to pass on.

Looks like it’s a Pirates run. The latest player drafted to be selected in my little draft (and really the latest player of note to make it to the bigs and do something); this slow starter is a career .270 hitter with 25 homers. He is going off on a tear right now, hitting over .400 for the month. When this guy is on, the Cards will be glad he is on their team.

I guess he is a Yank now, but we will still call it part of the Pirate run. I probably got him wrong. He should go much sooner but I just can’t take him over those other guys. Nady is solid. Career .280 hitter who averages 20 jacks a year, he is hitting .320 this year. He could walk a little more but he is still good. Another one of those guys who needs to learn to stay healthy.

This guy rocks. I had him so low because I am trying as hard as I can to not be biased, but a career .280 hitter who can give you 10 steals/home runs a year is pretty nice. He is a great defender a solid leader. I would take him first.

There was a time when he would have been the first pick of the draft. I think he is incredibly overrated. I would draft Boof Bonser of D-Train but he still has upside. The question is whether or not he can return to his old self. He would probably go ahead of those outfielders because the mere chance of him returning to form is really valuable, but I just don’t like him so here he stays.
17. The Dodgers are up, and they take… Rocco Baldelli (1st Round, 6th Overall!).

Another injury prone outfielder who has 20 home run potential. He is a punch line right now. The career .280 hitter could still have a decent career, but he could also be out of baseball in 2 years if he keeps up with this pace of injuries.

A solid bull pen guy, he is about the last productive to player to come out of this draft (thus far). He is the sort of guy that grows on trees. A solid bullpen guy who may have a good career. Career era of 3.81 and he is having a sub par year this year, lets see how far he goes.

Ok this is weird. This is exactly where the Pirates actually drafted Burnett in the 2000 draft. He is a complete bust for where he was drafted though. He is now a crappy spot starter bullpen guy. He has only seen action in 2 major league seasons, and this year fields a 4+ era.

Another bust. He is a crappy starter with the Twins that they have been looking to deal. With a plus 6 era I would not he shocked to see him out of baseball soon. The Royals are probably going to make a deal for him any day. He was a part of a sweet trade though. The twins traded A.J. Persynski to the Giants for Boof, Liriano, and Joe Nathan. That is a total steal.

That concludes this year’s draft. Bonser was the last “productive” player of the draft.
Here are my thoughts:

Throwing Boof and Burnett aside, only 4 legit big leaguers came out out of the first round (Gonzalez, Baldelli, Utley, and Wainwright).

16 of the players drafted in the first round are out of baseball. Over half are already gone. That is mind blowing,

The Pirates came out really well from this draft, ending up with 4 of the productive players (although they only drafted McClouth and Burnett).

Baseball drafts are boring. Why would anyone want to watch this on TV? Hardly any of these guys make an impact and no one knows who they are.