Skip to content
College Football NCAA
November 29, 2009 Jared
(Quick Editor’s Note: This post was written before Florida’s game against Florida State, so all of the stats are current through 11 weeks. Also, Tebow’s performance against Florida State, the one where the blocking was so good that he wasn’t touched on either one of his rushing TDs, doesn’t change Jared’s opinion.)
You might call it a vendetta. Some may call it sacrilegious. 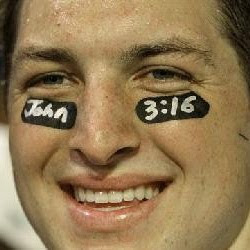 I don’t know the exact word for it, but I can tell you this much: I care a little too much about, uh, educating people about exactly how overblown Tim Tebow has become.

I am, of course, no pioneer nor the lone voice in this matter. Deadspin makes a weekly mockery of the deity our media has made Tebow into. We’ve made fun of it on this blog. Other blogs have taken their shots.
Unfortunately for every sinner hiding from Tebow’s mystical mystiqueness, there’s a good samaritan fully basking in his glory.
So, as long as a national voice holds the opinion that Sir Tebow is the Sportsman of the year, you’ll have to forgive me for my continued transgressions.
I’m taking aim at the notion that Tebow should be a Heisman trophy finalist, and belongs in the conversation as winner.
Let’s debunk some farces:
Farce #1:
Chill out, Jared. Tebow doesn’t have the numbers to get invited to New York this year
Ah, how right I wish you were, #1. Here are Tim Tebow’s numbers through 11 games this year, and through 11 games last year:
2009: 1,945 passing yards, 65% completion percentage, 14/4 TD to INT, 155.42 QB rating; 706 rushing yards, 11 rushing TDs
2008: 2114 passing yards, 66% completion percentage, 22/2 TD to INT; 427 rushing yards, 11 rushing TDs
For those of you struggling to comprehend the Book of Numbers, here’s what you need to know: Tebow’s slightly depreciated passing production this season are balanced out by his improved rushing numbers.
Also, Tebow missed a large chunk of Florida’s game against Kentucky because of head trauma and still wasn’t 100% for the LSU game two weeks later. Those in favor of The Cause will certainly take this into account, unless they believe Him to be invincible (which I wouldn’t rule out).
Work all of that in- and figure in a better team record for Florida this year than last year- and Tebow is a decent showing in a win over Alabama from being invited to New York. Stamp it. You heard it here first.
Farce #2:
Tebow’s numbers are a product of SEC defenses being the best in the country, so you’d be dumb to heavily weight them in his Heisman candidacy
Uh, yeah. About that. Counting by points allowed per game, there are currently three SEC team defenses in the top 20 in the nation (including Florida). Florida has played one of them (LSU). In 2008, there were five team defenses in the top 20 (including Florida), and Florida played three of them.
Rather go by total yards allowed per game? There are five SEC teams in the nation’s top 20 (including Florida) in ’09. Florida has played two. In ’08 there were also five including Florida, and the Gators played three of them.
Simply put, that argument was more valid last year, WHEN TEBOW DIDN’T EVEN BELONG IN THE TOP FIVE IN HEISMAN BALLOTING! AHHHHHHHHH CAPS LOCK!!!!
Farce #3:
Florida wouldn’t be the same without His Tebowness.
I mean, really? I guess if you mean “Tebow doesn’t play, isn’t replaced, and Florida plays 10 on 11 without a quarterback, THEN Florida wouldn’t be the same without him” then there’s an argument to be had.
And sure, it’s true that Florida wouldn’t be as good with a replacement-level-or-worse quarterback. But if you stuck backup John Brantley in there at QB with those 13 Rivals 5-star recruits on the roster not named Tebow, I have a hard time reasoning that Florida still wouldn’t be the best team in the nation.
For those of you not aware, Florida’s defense leads the entire nation in scoring defense and yards allowed per game. Do you really think it takes “the best player in the nation” to score at least 12 points per game with a great coach, great offensive line, and great skill position players?
Again, 13 5-star recruits not named Tebow. The best defense in the nation that, despite what some of the more devout followers may try to tell you, Tebow is NOT a part of. Do we really think it’s because of a QB that has accounted for less than 3,000 total yards that Florida has reached this pinnacle? Because of one quarterback? Really?

And seriously, save all the “leadership” comments. Have you been in that Florida locker room? Do you really know how big an impact his head-butting, screaming and overall insufferable-ness really has?

Farce #4:
Tim Tebow is the best player in the nation, regardless of statistics, and not only should the Heisman be convoluted so He can win it, but the award name should be changed to the “Tebowman Trophy.”
Here’s a reading from the secret, unpublished Book of Jared: “Go love thyself.”

2 thoughts on “Te-blown Out of Proportion”