The following is a prime example of why I’m not a gambling man. Don’t believe me? I’ll bet you $20 that I don’t gamble. Heck, I’ll even give you 5 to 1 odds.

Anyway, Spud Mann, an Omaha resident and fantasy football enthusiast (probably not anymore, though) was forced into the punishment of a lost bet. His fantasy football league, which included 9 other men, had a bet that the person who finishes the season in last place has to get a tattoo to commemorate the accomplishment.

This is that tattoo: 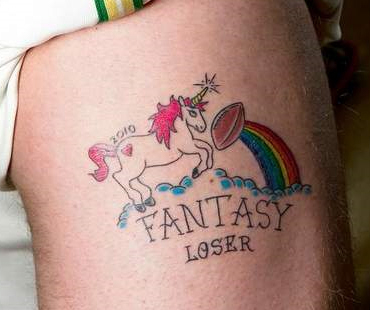 This tattoo not only brings shame and humility to Spud, but also the answer to what would you get if you mixed football with Adam Lambert.

It’s bad enough that this guy has to walk up to people and introduce himself as  Spud, but now he has this ridiculous display of failed fantasy football success plastered on his arm. The worst part about it? He barely had anything to do with the outcome of his league. Sure, he is in charge of adding and dropping players, but he has no control of how his team performs. He has no way of motivating his players before they take the field. He just has to sit back and hope for Chad Ochocinco to go out, catch every ball, and possibly score more points than whoever his opponent has on his team.

When you think about it, there is about as much skill in fantasy football as a game of Go Fish. Saying you’re a good fantasy football owner is like Ke$ha saying she’s good at singing talking over music. Anyone can do it.

Unfortunately for Spud, his name is Spud. But also unfortunately for him, his players performed the worst for the entire season, and he will forever be reminded of that every time he looks at his arm.