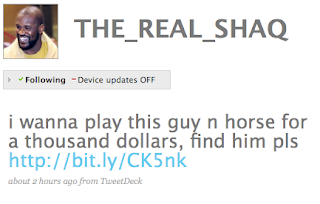 So apparently Shaq tweeted last night that he wants to play some kid in horse for (say this slow) one thousand dollars!

First of all, can Shaq even shoot? All the kid has to do is hit five consecutive free throws… Scratch that, five consecutive outside jumpers and he will be 1K richer. Or heck, just take some advice from Aaron Carter, because apparently he beat Shaq before. Just BOOM, put it in the hoop like SLAM, hear the crowd yelling out JAM, and apparently that’s how you beat Shaq.

Now if this was an acting contest, there is no question The Diesel would win. But this is trick shooting and let’s just say that Shaq is the Steve Buscemi of shooting basketballs.

It’s not very likely, but if Shaq wins, he plans on asking the kid how his ass tastes, since apparently now Kobe CAN do it without him. Shaq needs someone new to dawg on in his raps.

The video that Shaq has linked in his tweet of the guy he wants to play is below. Enjoy, and figure out if there is anyway this could lose to Steel.