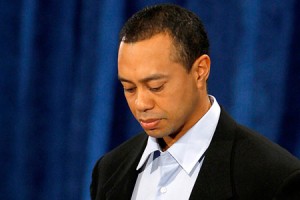 So I don’t know if you heard, but Tiger Woods held a little press conference on Friday.

In case you missed it…

I actually made an attempt to watch the entire thing, but it was so laughably wooden and scripted that I had to cut it off.

I mean, who does this guy think he is? Bill Clinton? Not that I don’t think the dozens of women he bedded is a tad more egregious than a couple interns and a cigar. But, ultimately, Tiger Woods is just some dude with a golf club… not a head of state. And despite the fact that I’m going to miss “Tiger Woods PGA Tour” on the ol’ X-Box, I don’t really think that he owes anyone an apology but his wife and his kids (albeit, when they’re old enough to comprehend what adultery and compulsive sexual behavior are).

This post isn’t really intended to be all that humorous. I’m kind of serious. I legitimately feel that Tiger is more deserving of pity than disdain. I feel like his situation sort of exemplifies the double-standard we hold our superstar athletes to.  We regard regular guys as super human due to some arbitrary criteria like being a superior athlete then condescend them and abandon them when they reveal that they’re just regular people, prone to the same temptation as anyone else.

Maybe I’m being a bit of a bleeding heart, but cut Tiger some slack. All that fame and all that money, women had to have been literally throwing themselves at him. I’d wager that you’d probably have a few slip-ups yourself if you were subjected to a cleat chaser onslaught of that magnitude.