On Wednesday night, the Boston Bruins defeated the Vancouver Canucks 4-0 to win game 7 of the Stanley Cup Final.  This shouldn’t be news to anyone.  And by now, most of you have probably heard thousands of people in Vancouver rioted and tore the city apart (looking for Luongo).  Over 100 arrests, 150 injuries, and multiple burned police cars on record. Heck, by now, you’ve probably even seen the picture of the riot couple.  While I could talk about the humor generated between two people making out under these circumstances, I’d rather focus on the Vancouver fans themselves.  The images from the riot are scary, hilarious, and deserving of their own forum.  Since the Finals themselves have been recapped by ESPN about 146 times already, we’re going to give you an in-depth analysis of the riot (not the Cardinals shortstop), complete with pictures. 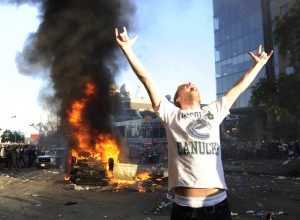 This gentlemen is an avid supporter of the Canucks (and whitey tighties).  He clearly was heartbroken by the loss to the Bruins and he’s seeking some sort of comfort in the fire.  There is a 98% chance he went directly to White Castle, downed a Crave Case, and smashed a beer bottle over his head shortly after this picture. 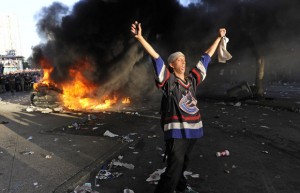 Well, I was wrong about that last one.  Apparently before he went to White Castle, he changed clothes and decided to set something else on fire. 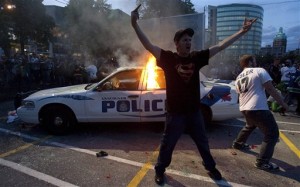 Title of Picture: A Cop Car On Fire Rocks!

And here is that guy’s brother setting things on fire.  He’s the younger brother that has a problem with his true identity (hence the black Superman shirt).  I believe the gesture he’s making with his right hand is street sign-language for “I Love Canada.”  It’s also safe to assume that after this picture was taken, he immediately headed to the nearest arcade to hit on 14-year old girls. 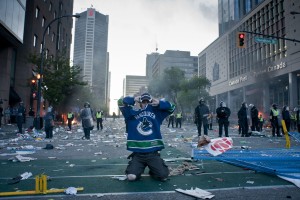 Title of Picture: Nothing Is On Fire, Therefore Nothing Rocks

At first I believed this individual was on the verge of being arrested.  Then I quickly took a look at the scene, and determined he is actually praying.  Seeing the destruction around him and the depravity of his fellow Canadians, he believed the end of the world was upon us.  After he realized it was just a riot, he went to play a round of golf (hence the Taylor Made hat he’s wearing).  He would’ve gone to compete in the US Open, but the Americans are exclusive and only let people from real countries compete in their tournaments (no offense, Steve Nash). 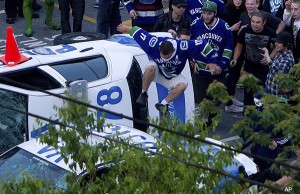 This gentleman (and I use that term loosely) kindly noticed that the front windshield of this police car was shattered.  Not wanting the policeman to be embarrassed by non-matching windshields, he graciously climbed on the hood of the car and proceeded to go ‘Mortal Kombat finishing move’ on the wind shield.  I predict his night ended in a cell next to a 300 pound man named Tito and learning about human anatomy. 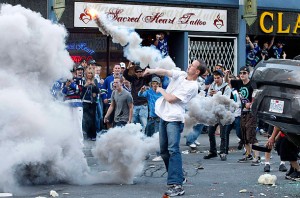 Title of Picture: The Rocket Arm

This fan appears to be throwing a flaming paper airplane in the streets.  I applaud him for his ingenuity and the impressive trajectory of his throw. I believe he spent the rest of his night sitting in a bar, realizing that it was just a hockey game.  Sobered up the next morning, he most likely enrolled as a volunteer fire-fighter and will spend the rest of his days teaming with Smokey the Bear to extinguish the angst of Canada. 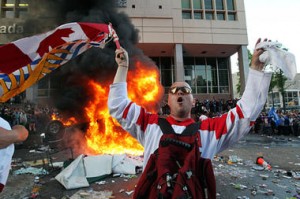 Title of Picture: In Case You Were Wondering, Fire Still Rocks!

This man was raised in Canada as the heir to the Mr. Clean empire.  Day and night he scrubbed floors and waxed his head, waiting to be called up to the big leagues.  Then on Wednesday evening, he finally realized Mr. Clean is a cartoon and will never die.  Heartbroken, he took to the streets of Vancouver and began rioting.  Little did he know everyone else was there because the Canucks lost…